The past weekend was Global Game Jam 2013. A gaming event where various teams create games in just 48 continuous hours. It is not a competition; there are no prizes. The teams are supposed to be formed at the event (not pre-formed) and the theme for the games is announced at the start. This is to ensure the games are not prepared in advance - they actually took just 48 hours to build. The teams create their games at organised locations around the world and there is a generally friendly atmosphere. In Kuala Lumpur, the event was held in the quite plush library of KDU University College. The bookshelves were taped off, but there was still plenty of space and seating.

I only heard about this event a few hours before it began, so didn’t participate. However, the location was open to the public at the end of the 48 hours, when the finished games would be presented. At KL there were 5 teams creating games around with the theme being the sound of a heartbeat. Here are pictures of the teams presenting their games (click on the image to go to their game page on the GGJ website). 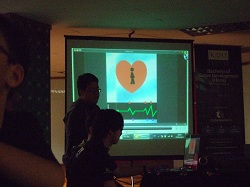 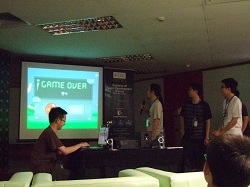 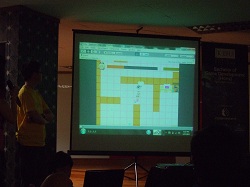 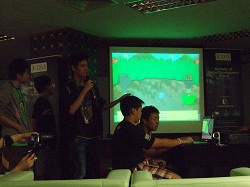 I was quite impressed by the games considering how long they had to develop them. Getting anything going in that timeframe is an achievement. They put my productivity to shame. Although I suspect looking around the room a few people were only awake due to caffeine and sugar. Bath and bed were probably in the near future for most of them. A couple of the games looked particularly good. I could see them going on an app store as simple games with a little more polish.

Most of the participants were students of Game Design & Development at KDU (only 2 women though, so the standard male-female ratio in computing continues here). Furthermore, there appears to be an active game development community in KL. I had feared that most game development would be sucked south to Singapore (where I know there are a couple of studios). However, this seems to not be entirely the case. With a university course, an active IGDA chapter and at least one studio which turned up to see the games too, I hopefully won’t feel isolated.

It was also interesting to note that all the games were developed using Unity3D. I think the free Unity tool really helps overcome many of the barriers in writing modern games. I started writing simple text and sprite games as soon as I learnt to program as a teenager in the mid-80’s. Most of the motivation for wanting to code came initially from wanting to make games. These primitive attempts were not too far removed from the commercial games of the time in look and feel. It was clear how one could write a Zork, Galaga or Chuckie Egg given the time and motivation. However, after Doom and Quake I think the perceived difficulty in creating a decent game greatly increased. It would be nice to think that tools like Unity and events like the Game Jam, help encourage people to program by making it seem again possible to create decent games.