This past weekend I took part in the Global Game Jam here in Kuala Lumpur. At over 480 locations around the world, people got together in small teams to create a game from scratch in 48 hours. With Yang and Kyle, we created Gripversion, a simple puzzle game. The game requires the Occulus Rift and Razor Hydra to create a virtual reality experience. Here is a video of a tester playing the second level of the final game. On this level the hands are inverted (the left controller moves the right hand and vice versa). The aim is to pick up the red box and drop it through the hoop.

Turning up at the jam I was quite nervous. I had attended the final presentation of the 2013 jam and it seemed like fun. So here I was for the next one, but having no idea how most of the weekend would work. I also seemed to be the oldest participant by at least 10 years. However, everyone was incredibly friendly and the weekend was well organised, so there was no need for concern.

The jam was held in the library at KDU, which offers game development courses. It was a large open space with lots of desks and comfy chairs. The organisers were lecturers from the university and the vast majority of jammers were students or the recently graduated. During daylight hours there were also around 30-40 high school students participating in a game development bootcamp where they learnt the basic of creating games in organised lectures and lab sessions. A great idea and also a great source of testers!

The jam started at 5pm with the recorded keynotes. Their message basically boiled down to write games that are different and emotional. Then came the theme for our games, “we don’t see things as they are, we see them as we are.” My mind went blank. We had an hour or so to come up with ideas before all going out to dinner together. My best idea was a sort of Rorschach inkblot guessing game, described by the person sitting next to me as “definitely a programmer’s idea.” 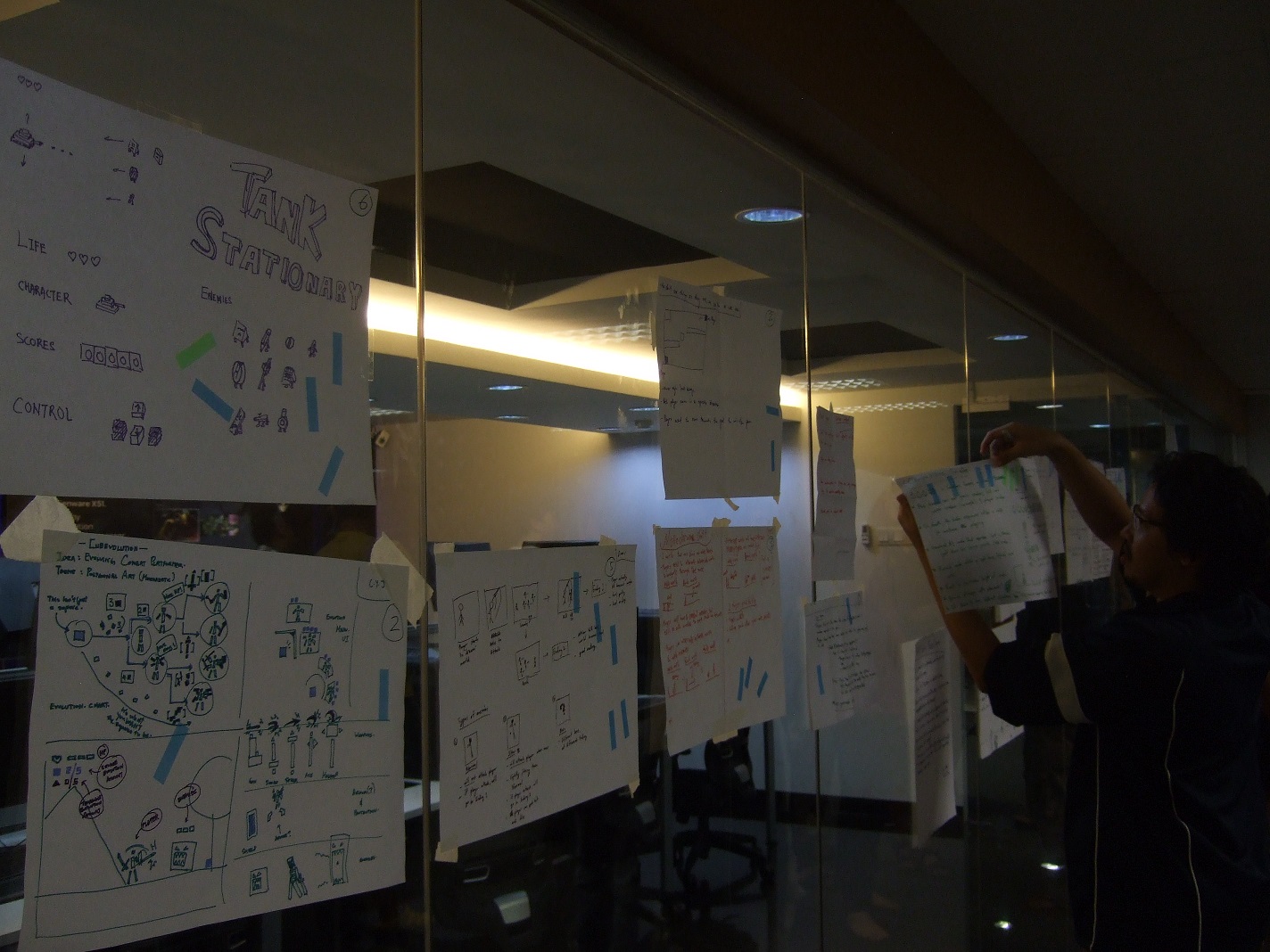 After dinner we formed teams. Unfortunately, as most of the jammers already knew each other, they came with preformed teams (against what I’m told is the spirit of the event). To stop preformed teams using preformed games, all such groups had to use a generated name for their game (try it!). Thus, with much hilarity we were promised games such as Fabulous Donkey Fiaso, Panzer Surgery Invaders, and Mystic Gopher Posse. The remaining twenty or so people without a group then pitched their ideas. In another diversion from normal jam procedure (so I’m told) the group voted on which ideas should be developed. There were only 6 programmers left (including me) so the organisers declared only 3 of the ideas would be pursued. Above is a photo of some of the ideas. The little blue and green stickers are the votes. 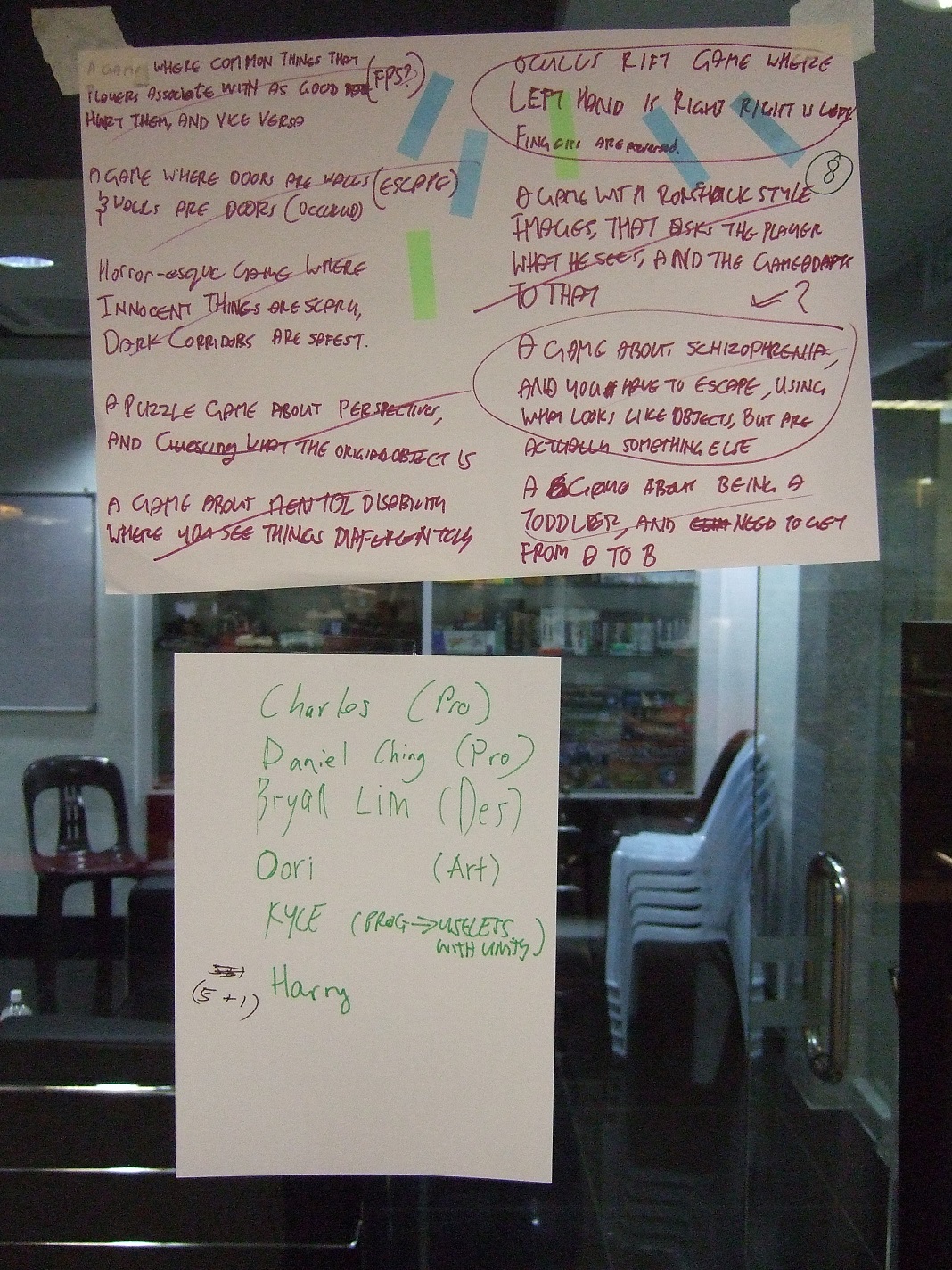 My idea was one of two (out of 18 ideas in total) that got no votes (next goal: representing Britain in Eurovision). So I went for the next most interesting “programmer” idea - Gripversion (above). One of the jammers, Yang, brought along an Occulus Rift and Razor Hydra, but had yet to code anything for them. The link to the theme was that we would play with the inputs (reversing hands, changing rotation axes) and outputs so that the player had to overcome their natural intuition (for instance, that their left hand was actually their right hand in the game). Tenuous perhaps, but more obvious than the links many of the other ideas claimed.

Thus the teams were formed around 11:30pm on the first night - nearly an eighth into the whole event. As people were already beginning to slow down ad get tired, it was clear ambitions would have to be kept limited. It also became clear that with no experience in Rift and Hydra programming, just setting up a simple environment would take some time. It further transpired we didn’t even have the programming APIs to interact with the devices. At the speed of the local net connection - just downloading them would take a couple of hours. Programming was obviously going to be the choke point, so I got to work. We used Unity3D, so I was ready to go from the start. About half the games used Unity, the other half used Stencyl. 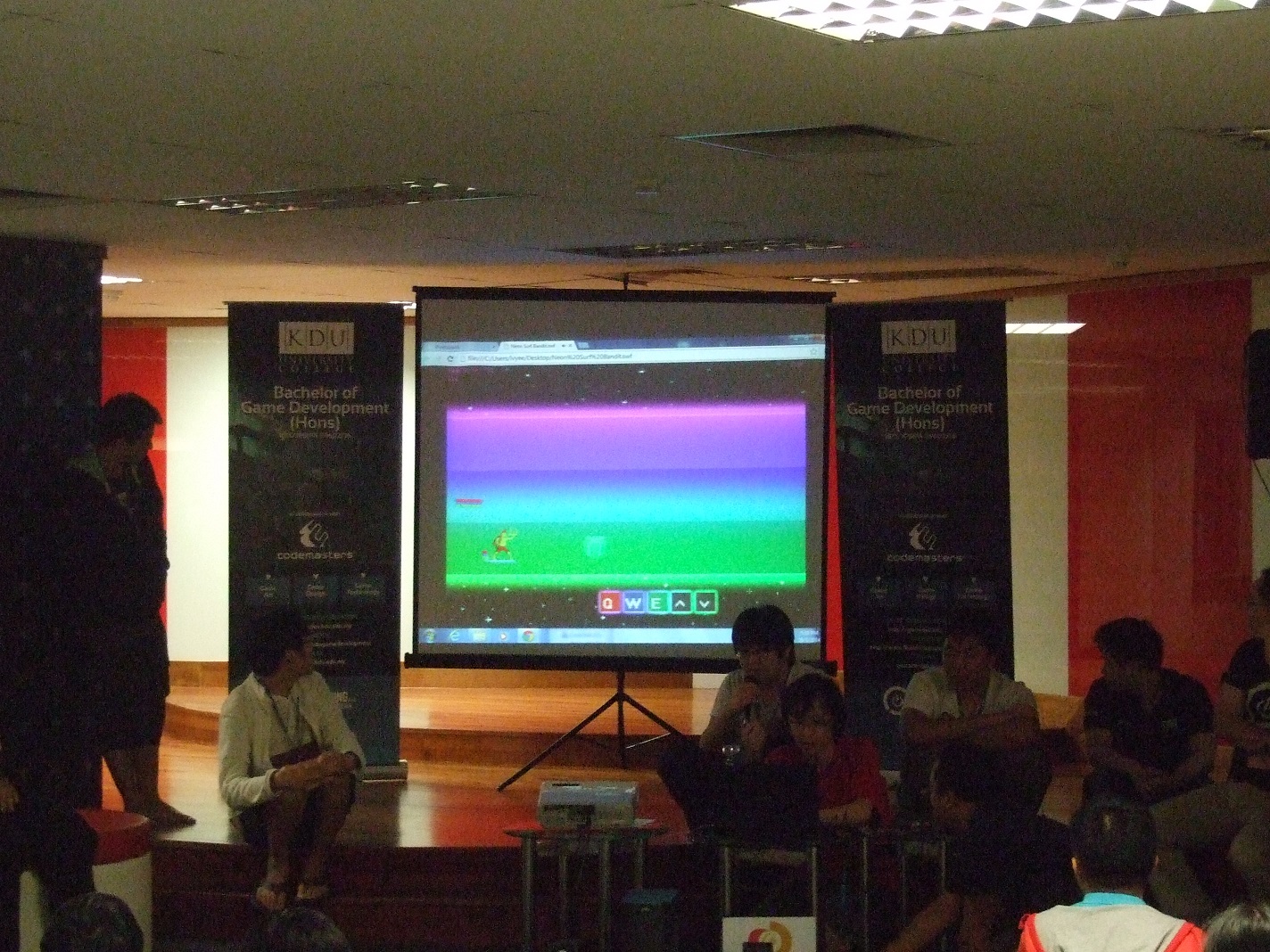 Initially the team had a good spread of programmers, artists and designers. However, as the coding work mounted the artists had increasingly less opportunity to express themselves. By the start of the second day it was clear they would be better off in another team. So they started another game using the generated name Neon Surf Bandit and completed it in under 30 hours (photo above). 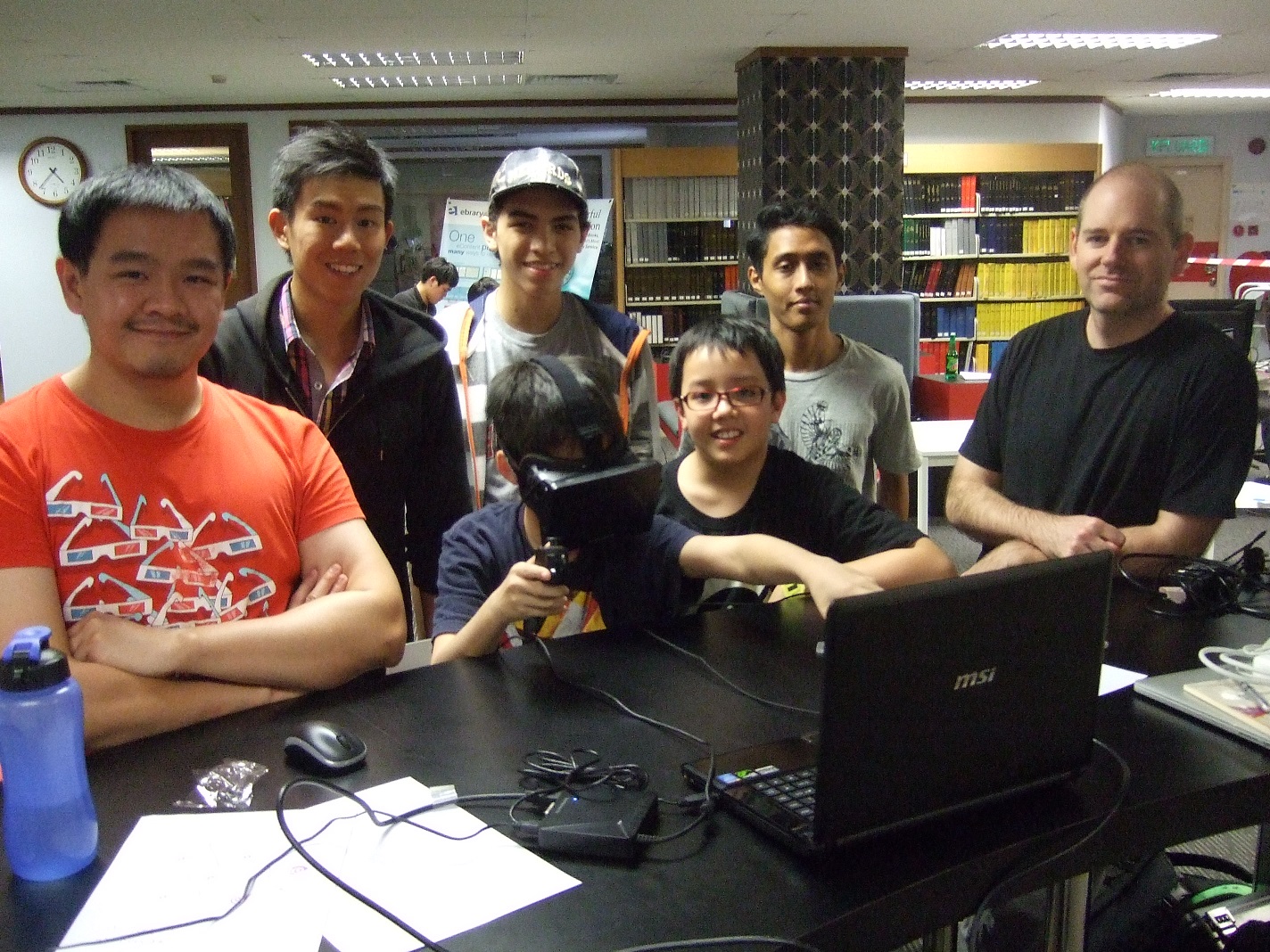 Now down to a team of just three programmers and no artists, development became problematic. There was often only one person by themselves, the others off eating, sleeping or showering. Or dealing with the steady stream of people interested in trying out the Rift (Yang had a copy of Surgeon Simulator ready for these demos). I handled the Hydra work (reversing inputs etc), picking up objects in the scene and the 5 levels we created (placing objects and checking completion conditions). Others handled the collision detection and setting up the Rift. The result, while basic, worked as expected. There was always a line of people wanting to test it and they all had positive remarks afterwards. Although we were unsure how much of that was just the novelty of a VR environment - the most common question after a demo was “how much does an Occulus Rift cost?” Players were a little confused by the input inversions, but in a puzzling manner rather than as an annoyance - which counts as success. Interestingly people overcame the puzzles quicker when using the Rift than when just watching it on a normal screen. We think that was to do with the extra depth perception the Rift affords.

I managed 9 hours total sleep over the jam period, but less than an hour of that on the first night. Bringing pillows, eyemasks and earplugs are clearly signs of game jam experience. The second night I headed to a quiet corner before the rush. In the photo below, my sleeping spot is on the red & white cushions in the far corner. I particularly like the fortress of solitude one jammer created by placing inverted chairs ontop of normal chairs - someone is in there! 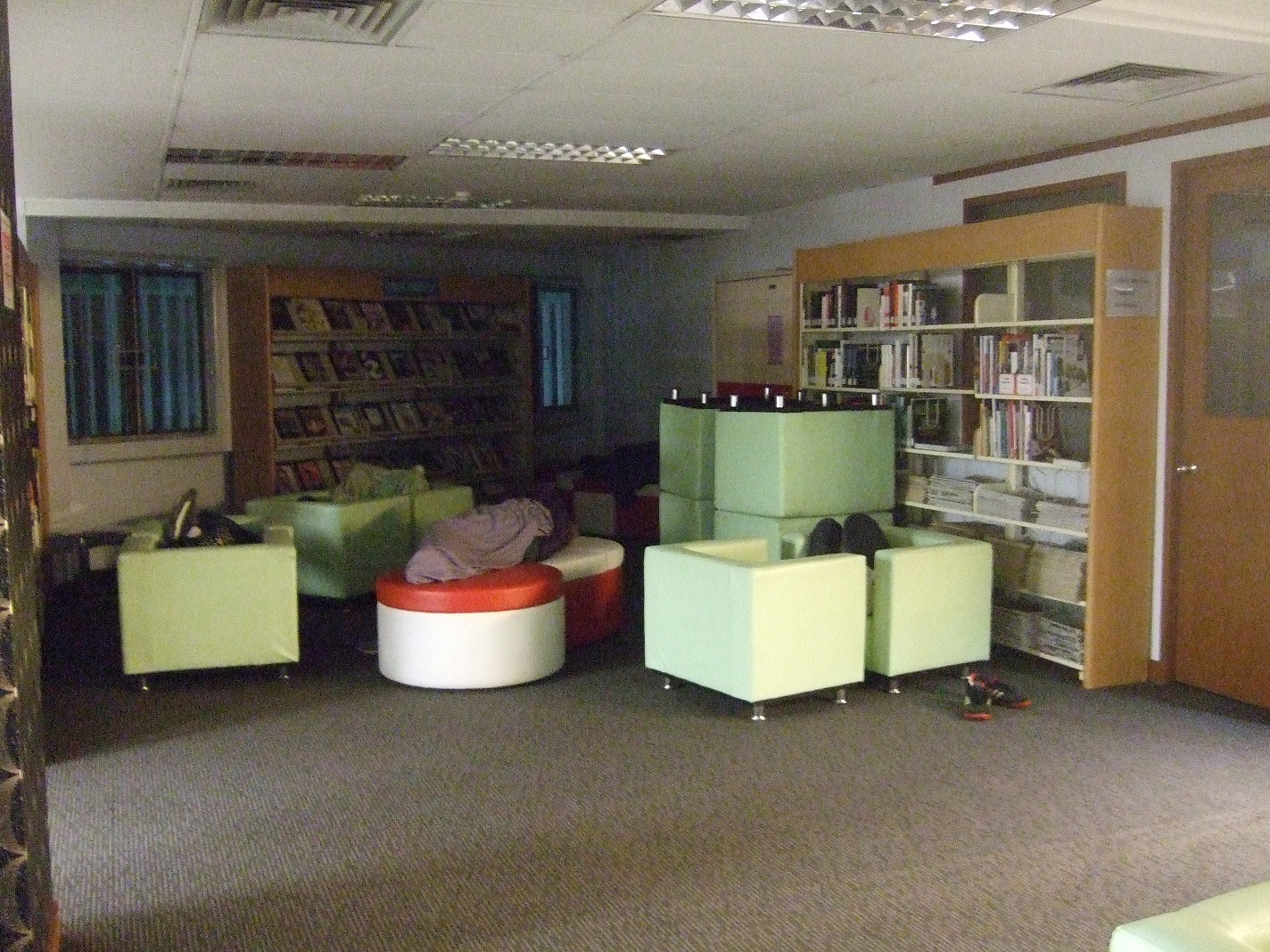 While at points I found the process extremely frustrating, in the end it was a positive experience. I hope to attend again next year. The plan will be to join a large team with many artists on a more “traditional” idea.