The last few days before the UK election saw the image below circulating around the city. I saw it first on FT Alphaville. I find this image incredibly annoying. Not because the message is necessarily wrong. There is a strong case to be made that the Labour’s party’s rhetoric on their ability to manage the UK economy is in no way matched by their actual management of the economy (although it’s debatable whether the Tories would have been any better). Instead, it is because the image is using a misunderstood part of the financial world to produce a misleading graph. 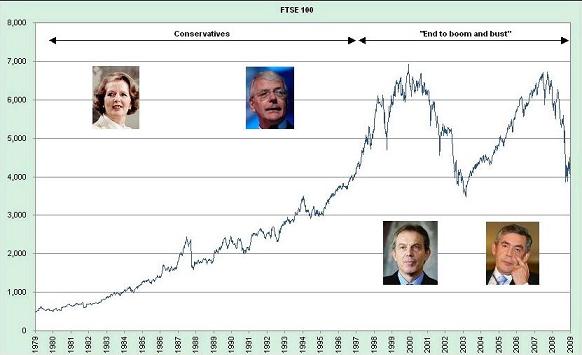 The image is a graph of the FTSE 100 stock market index of the largest companies listed on the London Stock Exchange (LSE). It is a UK version of the S&P 500. Like other share indexes it is often quoted on the news in absolute terms as well as the absolute rise or drop over some time period. For example yesterday the FTSE 100 closed at 5123, a drop of 138 points. However, to compare movements the absolute point value should not be used. This is because the index is calculated as the change relative to some reference date. Calculated from this base, the larger the index, the larger point move required to be equivalent to a move at a smaller index move. A 2% move when the index is at 5000 is 100 points, when the index is at 2000 an equivalent move is 40 points. As the index gets larger, point movements will naturally become larger for no difference in activity. Thus the graph above is misleading because it exaggerates the more recent point moves at a larger index level compared to the earlier moves.

It is the percentage move that is important. If the graph showed percentage moves the 1987 crash would appear much larger and the recent crashes smaller. To better show the relative moves, I found a graph of the FTSE using a logarithmic scale on Yahoo. As can be seen below the recent boom and bust don’t seem as large, but they are still there. So the same message could have been sent with a less misleading graph.