After 4 and a half years of service, my laptop (underpowered when I bought it) is finally beginning to give up. It gets very hot, too hot to touch just running Eclipse and iTunes. Trying to watch a video longer than 30 minutes usually results in a stall or sometimes even a crash. It has had a good run, but it’s time for a new one, especially considering how much I use my computer for work and leisure. So I decided to build a new desktop - below are the before and after pictures. 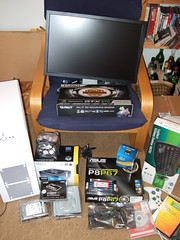 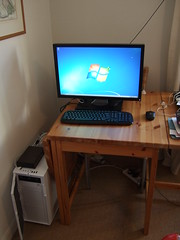 The components I used are:

I last built a PC from components 10 years ago. Despite this, I was fairly confident I could do it despite things changing a bit since the last time - separate graphics cards and CPU fans are new to me. There are many good guides on the net on how to build a PC (here’s one), so I won’t unnecessarily add to them. However, here are some photos of the process:

After that last photo I just tidied up the cables, turned it on and I was done. Or so I thought. Everything worked, but the BIOS only registered 4GB of RAM. I tested all the sticks and they were fine. Puzzled, I looked it up online. It seems that the BIOS that ships with the P8P67 motherboard can only support 4GB, as discussed here. I had to flash the BIOS to a more recent version and now it works - but still, a poor show from ASUS.

Anyway, it’s all working and I’m very happy with it.