My new’ish PC worked fine for its first two months, then disaster struck. For the first time in many years I saw that old favourite, the blue screen of death. My initial investigations (based on the error code STOP 0x00000074) led me the wrong way, so this article is to give some Google juice to the resolution. 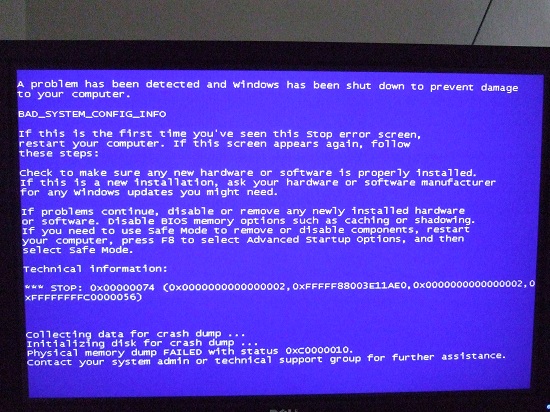 After getting the BSOD with the code STOP 0x00000074, I couldn’t start the PC normally, it would pause just after login and crash before I could do anything else. The same problem occurred starting it in Safe Mode. Going into Safe Mode with just the command prompt (no GUI) meant I could run some commands. Running chkdsk on the data drive returned no errors - a great relief. However, the Windows drive scan crashed the PC again. The OS was on an OCX Vertex2 SSD while the data was on a HDD. At this point I hit Google and posted this question on the Microsoft forums.

The results of searching the Internet suggested the error was in the registry or more likely the RAM (see here). Memtest ran fine and swapping around memory sticks made no difference. I was fairly sure it wasn’t the memory. At this stage I decided to write off the OS installation and reinstall, but the installer said it couldn’t see a drive. The BIOS could see my drive, but Windows could not. I tried an Ubuntu CD, different cables and SATA ports - drive still couldn’t be detected by anything other than the BIOS.

At this point the problem was either drive failure on the SSD (possible) or a strange motherboard error (unlikely). To determine which I bought a new Crucial SSD (a different brand). When it arrived the next day, I installed Windows7 on it with no problems. I then put the OCZ SSD back and the same problem reoccurred. Back to the Crucial for a final check and it worked fine and is still working to this day.

The problem was the OCZ Vertex2 SDD failing in a manner that made it seem like a RAM error.

Postscript: I sent the OCZ drive back to Ebuyer and they send me a new one within a week. This weekend I’m going the install Ubuntu on the new OCZ drive. In the meantime, the Crucial SSD is working fine and I backup a little more often than previously.