It was always my plan at university to do honours - it was a step on the way to a PhD. The Computer Science degree at The University of Western Australia was nominally a three year degree, but a small number of students with good grades were invited to do a fourth year in order to graduate “with honours”. I got the required grades and thus got an invitation to do the extra year. Fourteen other students did the same out of a third-year class of just over 100. A few good students who must have had invitations refused - I knew a couple of them, including one who got very good grades. Although on the whole, the honours class was representative of the better students in our year. That year I worked harder than I ever had before (but have a couple of times more since). I needed to achieve 1st class (the highest grade available) to stand a good chance of getting into the PhD program. This is the story of that year.

At the end of the honours year we would receive a single grade for our degree (rather than the pass/fail of the three year degree). This would be based solely on the grades from the extra year - as we were deemed to have already passed the basic course. This was quite different from other faculties (like Engineering) where the honours grade was determined on the whole 4 years worth of coursework. Lucky for me, as my first two years of coursework were fairly ordinary. The honours grade was determined as 62.5% based on coursework and 37.5% on a research project. Having studied the marking scheme carefully, I decided to focus more attention on my coursework than the project. This was a mistake as the final marks appeared to be more influenced by the project than the coursework. I heard the marks for the units and the projects were set at the same meeting where the final grade was determined - one can speculate as the to the order these were decided.

Honours students had a couple of weeks to decide upon a suitable project. A couple of people already knew what they wanted to do and just needed to find a lecturer to supervise them. The rest of us looked at the project lists - two or three example projects suggested by each lecturer. I wanted to study something based in AI and particularly neural networks. I knew the supervisor I wanted, Dr Philip Hingston, who had a couple of such projects listed. Unfortunately, he left the department to work in industry just before the academic year began (as it turned out he was my manager at Rio Tinto R&TD a few years later). So I chose the next closest project on the list. It was “A Connectionist Network for Object Recognition” supervised by Dr Paul Hadingham. I remember rushing to meet Paul in order to claim the project in case anyone else was interested - I needn’t have worried.

The basic idea was to create a system that could classify simple line drawings in a way analogous to human sight. Thus it would have 3 layers. First, one like the back of the eye that examined the basic parameters of the lines (what angle it was on; whether it was curved; whether it joined another line). The next layer would consolidate multiple lines and compare these to known pattern, supposedly like the vision centres at the back of the brain. The final decision on the object represented by the drawing would be decided in the third layer, corresponding to the cerebral cortex. The starting point would be a representation of line drawings created by Dr Hadingham.

Or at least that was the theory. I started by reading academic papers on: grammar, to understand Hadingham’s representation (including one by Noam Chomsky - I felt so well-educated); neural networks, becoming more disillusioned the entire time; and human vision, which for some reason seemed to involve putting probes into living cats brains - gruesome stuff. However, in that end no of that mattered. The system worked by using Hadingham’s representation to convert the lines of a drawing into points in 4 or 7 dimensional space. The points were grouped together into “features”, and then probabilistically compared to templates representing various objects (the templates were generated by a training set of drawings representative of the object). If the features were close enough to an object’s template then the drawing was of that type of object. For instance to recognise a human, it would look for something resembling a head, to recognise a car it would look for wheels and a roof. It all came down to statistics, but then so do neural networks, so I didn’t feel to bad about the whole thing. If you are masochistic my thesis is available here in PDF format or here in the original Postscript format. I wouldn’t recommend reading it - its not well written.

Only one chapter of the thesis is devoted to the actual object recognition. Strange considering this was the stated aim, but expected considering the time spent on it. Much more time was spent writing a program to nicely display the 4 and 7 dimensional representation graphically and grouping points into features. This was because these were more interesting programming tasks. I thought I was a scientist, but my actions suggested more an engineer. Unfortunately I didn’t realise this. So I spent a great deal of time writing a program to input data files and output LaTeX picture graphs, which I could then include in my thesis document. Below is an example: the image on the left was converted into the graph on the right (the two points off by themselves represent the head). I also spent quite some time coding solutions for solving the maximal clique NP-Complete problem in order to find features in objects. NP-Complete problems are well known in Computer Science. It can be challenging to code solutions for them that produce good results for large datasets in a reasonable timeframe. Through my project learnt a great deal about computing, but it wasn’t directly applicable to my thesis. 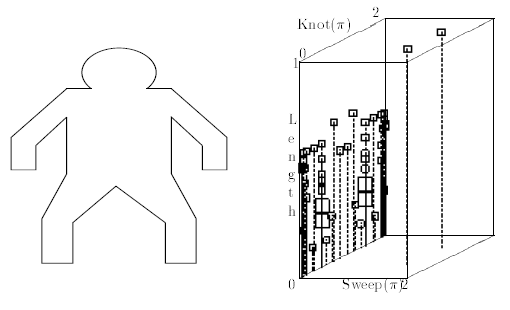 I worked hard during my honours year. Harder than any previous year of study. The final spurt of effort to get the thesis complete took a month and is one of the most intense sustained efforts I have produced (it has been matched twice since). Looking back at it now, I don’t know why it was so hard. There was a great deal of pressure to get a good grade and I wasn’t used to writing anything over a paragraph. Then there was preparation for a 30 minute presentation, posters for the hall, extra coding to plug gaps in the code and the coursework. My consolation is that all the other honours students were doing the same. Everyone pulled a couple of all-nighters, including people who seemed to cruise through 3rd year. In the end my thesis was one of the shortest at just under 10 thousand words and my presentation went well, or at least there were no disdainful questions at the end (as a few students encountered).

The five courses completed during the year did not leave much of an impression. I had to look up two on my transcript, Expert Systems and Computer Vision, as I had completely forgotten them. Those two and Neural Networks all overlapped slightly with my project, so with a bit of effort I got good grades. Although with Neural Nets, everyone got a good mark. The lecturer had a novel “binary” marking system for assignments. A submitted assignment would get one out of one. Only the final exam was properly marked - nearly everyone got over 90%. My comment on his evaluation was “1 course delivered: 1 out 1”. Scientific communication was my worst subject. It aimed to teach us to write properly - the lecturer had their work cut out with me. I can image it was made required after supervisors had to plow their way through innumerable theses written by computing students who hadn’t written more than code comments (if they were lucky) during the previous 3 years. The last course was Functional Programming, notable for a moment of clarity late in the course when I saw the the 10 line solution to an assignment that took me (and most others) over a hundred lines. I saw the light and where my understanding was flawed. At that point “got” the functional style and it was good.

There was a real sense of camaraderie among the honours group. It was just the 15 of us in the same classes. Our project’s were unique, so there was no problem with plagiarism. We spent a great deal of time in each other’s company. Much of which was spent playing an old Mac game called Fungus. As the year progressed an increasing percentage of our diet consisted of Coca-Cola, chocolate and pizza. High caffeine and sugar intake was almost a badge of honour. When we ordered in pizza often the postgrad students would chip in. They would reminisce on their honours year and tell us we were doomed. At 10pm, Mother’s (the local convenience store) would shut, so by 9:30pm someone was organising a “Mother’s run” to stock up - a small group would go and collect snacks for the whole group. I got to know the people working there by name. Occasionally there was the more desperate 2am “Maccas run” to a 24-hour McDonald’s in the city, but I was never part of that. Not because I wasn’t around at that time - I just wasn’t a fan of their food.

We had a special room at the end of the building - the honours lab. The desks were arranged haphazardly, almost like a maze. It was not possible to see the what was happening at the back from the front of the room. Towards the end of the year I and a couple of others dragged a bunch of the long cushioned benches that were in the hall to the back of the lab and used them as beds. In the last few days before the thesis due date it was too noisy in the lab to sleep, so they were moved into a vacant tutorial room. There was a wide range of computers from Macs and PCs to Sun Sparcs all with connections to the department servers and the Internet. It was a very nice setup for 1995. None of us had anything remotely comparable at home. We used to just roam around the network. One student found an open mail relay (there wasn’t much spam around back then) and soon we were all telneting into port 25 on various machines to send spoofed emails. Much hilarity ensued until it turned out some of the faked mail from the Head of Department wasn’t fake at all. That was the extent of my hacking.

During honours I became aware of the Web - starting the year being introduced to Mosaic and ending it with Navigator. I remember one student put up suggestive photos of his girlfriend. That was entertaining, until within a day the Head of Department came up to the room and told him to get rid of them. In case you were wondering there was a single woman among the 15 honours students.

At the end of the year I got 1st class honours and a government scholarship for a PhD. My aims had been achieved. Dr Hadingham suggested I write up my thesis as a conference article. I thought that was a great idea and started work. It was at this point I spotted a bug in my recognition code. Some of the inputs were being incorrectly ignored. However, when fixed it the system became much less accurate - in fact barely better than chance. I became disillusioned at this and quietly abandoned the paper and chose a new supervisor for my PhD.