After some previous work building Java NIO servers, there was still some question over the performance of the system created. Here are the results from a number of tests I ran, to see how such a server would handle connection and message storms.

The code from the previous blog article was modified so that there was a single-threaded selector to handle initial connections, but it handed off the message processing to a number of other selectors running in a thread pool. All of the tests were run on my 4-core Win7 64-bit desktop (full specs here). All programs (both client and server components) were run through Eclipse Helios using JDK1.6.0.24, always with 256MB of heap space and no other VM options set. The code is not (yet) available online, but it shouldn’t be too hard to work out a rough understanding from the previous article and some Java NIO knowledge.

As can be seen the Accept and Server times are fairly steady (I would guess 0.07 milliseconds is the fastest a selector can accept a connection on average). However, the faster the connections are created, the greater the lag at the client. No connections were dropped. I imagine the client delays are caused by some queuing. Possibly in the PC’s networking, but more likely in the wait before the selector starts processing the connection. In all the above tests the selector wait time is 1 millisecond, so the server will not wait long for a connections. I tried setting the wait time to 0, but some connections were then dropped. I also increased the wait time, and unsurprisingly this only increased the response time.

Speeding up the server code after the accept (ie, trying to decrease the Server column) could speed up acceptance by decreasing the time before the server is ready to process the next connection. This code could be moved into another thread, but then I’m not sure what would happen if a message arrived on a connection that hadn’t finished. I also looked at the cost of selector creation by having each connection create a selector just for itself. In this scenario the time taken increased, but more importantly the server crashed having run out of heap after 641 connections (the old generation filled up). I would estimate that each selector requires around 0.25 MB of heap.

Next to test the message processing. The client created 10,000 connections and once they were accepted each connection sent 10 message (for a total of 100,000 unique messages). The server just reflected the message back to the client. The client checked each message returned from the server was as expected (all messages were present and correct) and recorded total time taken. The variables in the tests were the number of selectors processing messages and the number of threads handling those selectors. The results are below. During all tests the heap didn’t grow to more than 55MB (from a 30MB base). 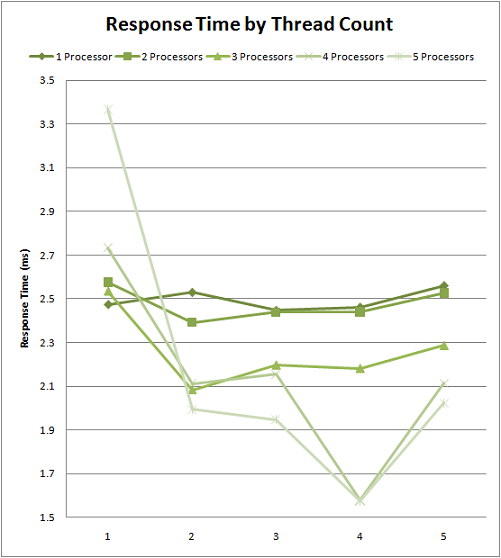 The rule seems to be that the more selectors the better and there should be roughly the same number of threads as selectors (it may be easier to see in the raw numbers). More threads than selectors does no good at all. I checked a few points further out, 7 selectors/7 threads and 10/10. They were quicker on average, but showed decreasing returns as they were both 1.26 milliseconds on average. However, the standard deviation also grew to around 2ms, when for all the other tests it was around 1ms (perhaps due to the extra thread scheduling in the VM)

This such a system should handle connection and message storms short of a concerted DDOS attack. For performance the rule seems to be pre-build as many message handling selectors as you wish and then provide about one thread per selector to support them.