After joining Knowledge-based Systems at Rio Tinto R&TD, my first task was working on the MineSim project. This was a very successful application to simulate minesites. To do this a user would define the topology/geology of a mine, the equipment/personnel available and the goals to pursue. The program would then simulate the mine minute by minute. New blocks would be blown when ready, little loaders would muck out the ore from the block and large trucks moved round the mine, picking up ore and driving back to the dumps.

It was incredibly detailed. At the end of shifts workers would have to be ferried around the mine, Muslim workers would take regular breaks for prayers, people got sick and equipment broke down. Trucks would plot their own route dynamically to take account of various events like mine road rules, breakdowns and new areas becoming accessible or inaccessible. It even simulated the engine dynamics of vehicles so their speed and acceleration/braking profile were accurate. Very accurate as it turned out. When checked against reality, our model was more accurate than the manufacturers’. A certain US manufacturer slightly overstated their trucks performance in marketing materials, while a Japanese manufacturer slightly understated. When backtested against a couple of real-life mines the whole simulation was accurate to within 3% of mine output over a couple of months. Good enough for how it was being used (testing the effect of various actions like buying more trucks or the order of block development). 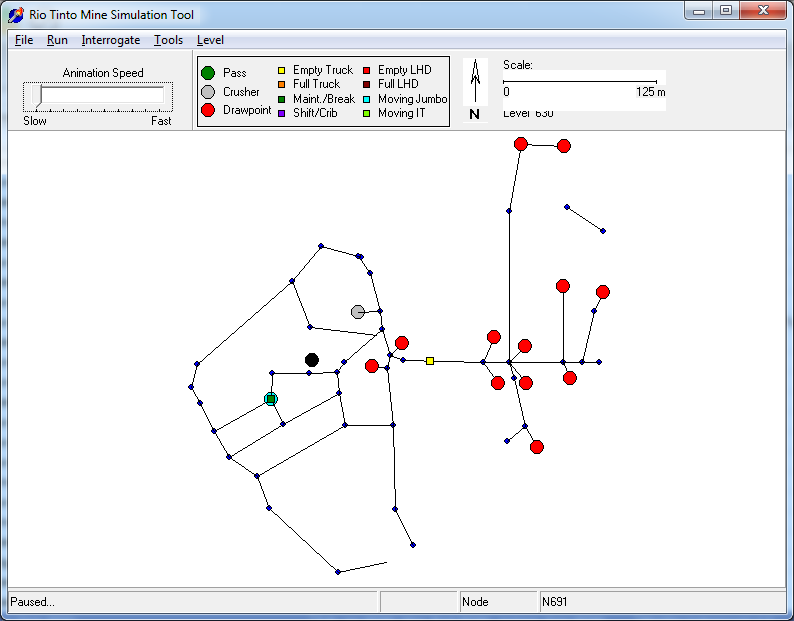 The application could run in a GUI if desired or alternatively just run as fast as possible to the end. The picture above is the simulation zoomed in on part of a mine (found in an old email). Adding a GUI was an inspired decision. The mine would be shown as a graph with lines representing roads. Trucks and other equipment were marked as little squares - colour denoting type and size representing how much ore was carried. Watching the squares moving around the screen at 10x normal speed was hypnotic. It almost felt like a primitive game. It also gave our customers confidence in the simulation when they saw it happening right in front of them. It was also inspired to have the inputs and outputs work through Microsoft Excel (rather than more technically respectable formats) as the customers on mine sites were comfortable with that tool and it made visualising data easy.

When I started on MineSim it had already been developed and used on a couple of opencut mines. My job was to make it support underground mines and expand it so that multi-year simulations could be run. The application at that time took nearly a day to simulate half a year. This is probably the closest I’ve come to proper algorithm work in my professional career. I improved the graph traversal code (used by the trucks to find a path) by recognising some properties of the graph and rewriting the existing suboptimal implementation. There were some other gains to be made by modifying the large amount of code written by mathematicians who taught themselves programming.

Underground mines are run in a very dissimilar manner to open mines. The processes and equipment are quite different. A well-capitalised underground mine digs its main shaft first and then extracts ore from the bottom up (it is cheaper than going top-down, but takes longer to get started). This means that after “mucking out a stope” (meaning extracting ore from a designated block of rock), it has to be filled in again so trucks can drive on top of it when mucking out the level above. This and other improvements to MineSim consumed my working life for my first months at Rio Tinto.

The end of the project was supposed to coincide with a visit to the underground gold mine sponsoring it. We would present them with the application and train them in its use. It took flights on ever smaller planes to reach Cobar, the nearest town in outback Australia. I was looking forward to seeing a working mine. Unfortunately when we arrived it was shut down due to an accident with the shaft lift the day before. No one was even in the mine at the time of the incident (the lift was operating automatically during shift change), but as a safety precaution everything was stopped for a week while the cause was determined. It was impressive how serious safety was taken.

It was probably a good thing there was no tour, it was a very busy trip. Our first action was to give a presentation on the program. The mine staff were impressed. They said most other people modelled filling in a stope as negative digging, but we simulated the myriad of steps involved. We were the most accurate simulation of underground mining they had seen. Then they spent some time telling us what we had done was still not good enough. It was an important lesson in the pitfalls of Waterfall process. We should have been talking and confirming we were building the right thing the entire time. I ended spending all day, every day trying to fix our code. At the end they were happy enough to keep funding the work. They got everything they wanted a couple of months late.

Part of travelling to a mine site was being given official Rio Tinto clothes. At the office we just wore normal office clothes. At “site”, we had to wear special clothes: steel-capped boots, hard wearing trousers and shirts (with our names embroidered on them). I was given these clothes a few days before leaving and when I arrived on site it was the first time they were worn. I was immediately an object of ridicule. The mine workers asked if my mother had dressed me. It seems that R&TD people had a reputation as soft city people and brand new, clean, site clothes just played to the stereotype. My team leader didn’t shave that first morning and his clothes were uncleaned - the mine workers accepted him. The lesson was learnt. It was also quickly reinforced. In the afternoon the Beard arrived after travelling separately to the team leader and I. The Beard was an older mining engineer who had transferred from the mines to work at R&TD. At the office he was always well-spoken and well-dressed, often with a natty waistcoat. When he arrived at the mine it looked like he had been lost in the bush for a week and just crawled out. As soon as he was spotted he turned the air blue with swearing. I was amazed how differently he acted looked and compared to the office. The mine workers loved it - they were all instant friends! One person joked that R&TD had finally sent a real man. I just went back to my coding.

The MineSim manager was pretty cool and one of the best manager’s I’ve had. When I needed to vent about some dodgy mathematician code (a 6 page function, containing tens of nested if-statements), he let me and then told me to go fix it. He managed to be friendly, but still get us working (to his advantage there was never a huge pressure to get something finished to a tight deadline). Senior management must have liked him too, as he was one of the few saved from redundancy at the end. He used to write two sets of travel reports: the official ones; and the version just for the team, written in a gonzo style - very funny. When R&TD was reoganised he managed to get our team renamed REPO so he could use Repo Man movie quotes like “the life of a repo man is always intense” and “ordinary fucking people, I hate ’em”. I can’t remember what REPO actually stood for, it was a fairly tortured acronym if recall correctly. His vision was that MineSim would evolve into an automated mine system. I hear Rio Tinto is starting to move in this direction. However I doubt any of our code survived. It would be surprising if anyone currently working on mine automation was ever aware of our work.

Besides the underground work I did various other little jobs on the MineSim project during my time at Rio Tinto. Including some work for a diamond mine and a coal mine. There was also an aborted attempt to produce a similar project for ore processing plants. It was to be OreSim (pronounced “AWE-some”). It never went anywhere as it seemed we couldn’t get anyone interested in it. That was the problem with R&TD. We were seen as internal consultants, but not very practical ones. Our work took time to produce and was all this “computery stuff” done by people who hadn’t spent much time at real minesites. When we did produce something worth while we couldn’t sell it to other companies due to our internal status. Thus we never got any scale. I believe MineSim could have been sold on the wider market, we sometimes heard favourable comparisons between us and commercial competition. A training product we produced was actually requested by a competitor. It would have been a big sale, easy, and not in any way a matter of competitive advantage (it was safety training). So it was suggested to senior management, who refused it. We had no real advantages as internal staff - we still had to market and sell our services to mines. However, we were handicapped by not being allowed to compete properly.

There were a few other projects I worked on: an optimisation tool for a coal port in NSW; a website with searchable mine information; and, a travellers advice website (unofficially nicknamed Bogucki Net after a lost tourist). My part of these wasn’t particular interesting. I did the ORM for the port tool and the search and display for the websites. The port work was most notable for difficulties with the first-timer team leader - he was micromanaging, dismissive and insulting. It got to the point I had to make a complaint to my manager (the only time in my working life). It turned out the other team member had also complained about the team leader too, so everyone calmed down and was on their best behaviour until the end of the project.