After Electrolley I worked at Rio Tinto in their Research and Technical Development division. I had wanted a job there for sometime. Many of my honours classmates and one of my ex-lecturers (the one I originally wanted as my honours supervisor) worked there. I had interviewed with them during my PhD, but was rejected as the position was for a more practical programmer and they saw me as too theoretical. After a few months at Electolley I was contacted saying a position more suited for my skills had arisen and asking if was I still interested. Soon I was being interviewed again.

The interview process was the most arduous I’ve ever encountered. First there was an interview by a couple of managers. Then another interview by the entire team I would be joining. A panel of nine people arrayed in front on me. During this part they asked me to give an impromptu 15 minute presentation of my ex-PhD topic. A quizzing on its practical applicability followed. By this stage I have been onsite two hours and they said it was time for the next stage. I was taxied into the city and given a battery of psychometric tests. There was a logical reasoning test (well-above average), vocabulary test (average), Myers-Briggs test (INTP, as always) and another test I’d never heard of before to check my work aptitude. Nearly 5 hours in total and I was completely drained.

I got the job and after a few months I heard that it didn’t really matter what the tests said. Half the team (including the manager) knew me from uni or honours, so unless I had a breakdown the job was always mine. To prove the point I was told the results of the psychometric tests. Apparently the unknown test had indicated I was completely unemployable and unable to work in a team. They ignored it and hired me anyway.

The Rio Tinto R&TD team in Perth was in beautiful purpose built building near Curtin University. It was designed to be like a village - a central street walkway acting as a street with trees and benches (all inside). Off the walkway came the open plan office space. There was also a large reception, board room, library, large eating area and kitchen. No canteen, but I never heard of anyone in Perth having a canteen. It was set on landscaped grounds with more than enough parking and there was tons of natural light. A very pleasant workspace. The only problem was the abandoned building and the emptiness.

The complex was built to house over 300 staff, but never housed more than 55 people while I was there. There was another entire building with workshops unused and locked up. Most of my colleagues spread themselves out over 2 desks. A couple of months before I started there was over 200 people on site. Most desks were taken and the workshops full of engineers. However, many were made redundant or transferred around the time of my interview. Four small teams were left (plus admin staff).

I was in Knowledge-Based Systems. We were supposed to focus on applying machine learning techniques (like expert systems) to mining problems. Although most of our time was spent writing mine simulations, linear optimisation systems (basically the simplex method with a large number of variables and a nice GUI) or training tools. There was another team of more “practical” software developers working with early web technologies. On the non-computer side was a team of mathematicians and engineers doing various consulting tasks and a small team focused on Computational Fluid Dynamics (CFD) in smelters.

With just 1st class Honours I was clearly one of the least educated people in the building. Their was a distinct academic bias. Most of the senior managers had PhDs, as did probably a third of the staff. People generally had time to think - although that may not have been a good indicator for future prospects. There were often discussions of very scientific topics and opinions were always well informed. Here I learnt the more theoretical side of software engineering with regular arguments on what process or pattern was best in a certain situation. Later I learnt the more practical side.

While I was there the place had an eerie atmosphere. All non-managers openly believed that we would all be made redundant sooner rather than later. Everyone knew the intimate details of the redundancy policy. It was very generous so staff turnover was low as people waited for their inevitable payout. I remember hearing a couple of anonymous shouts of “make me redundant now!”. There was a bit of black humour around the situation. When the head of the global technology division changed we joked about him being an evil leprechaun (he had an unfortunate staff photo) who would sack us all. We were right!

The site was also extremely safe. All sites in Rio Tinto apparently followed the same safety precautions. Thus our research office building took safety as seriously as a mine site. There was a sign at the entrance proudly displaying there there had been no lost time due to injury for over 600 days (not sure the actual number, but it was years). Towards the end of my time there the counter reset after a morning was lost when a minor traffic accident resulted in a checkup at the doctors (they were fine). We had a safety manager who trained us all on the safety precautions. Every month he would tour the site for safety violations and hand out cautions - normally for overly large stacks of paper or dirty mugs. I felt a little sorry for the guy, there wasn’t much for him to do. He previously had a similar job at a mine, which must have been much more interesting. Although it was impressive how after I casually mentioned my fingers ached a little one day to see how serious it was taken. I was visited by an outside ergonomics expert who recommended my desk be lowered a few centimeters. That afternoon it was dismantled and rebuilt! The expert was right, the new desk was much better. 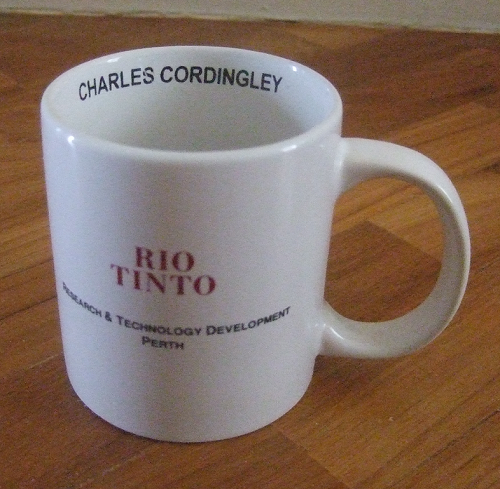 I sat with two colleagues is a small area of desks partitioned off between a reception desk and the General Manager’s office. The area was partitioned into thirds, each section with 2 desks, 2 PCs, etc. We took one section each. It was a good little spot. The partitions went up to eye level, and there was only one place to enter the area. The partitions were also setup such that to reach the back thirds a visitor would need to make a couple of 90 degree turns. Furthermore large pot plants had been placed at strategic points to block sightlines into the area. The basic affect was that we could tell when someone was coming towards us, but they couldn’t see what we were doing. Knowing the person who sat furthest from the entrance (an aspiring DJ), I don’t think this setup was unintentional. For the same reason none of the three of us could see eachothers’ screens. I had two PCs, but only ever used one, a decent second hand computer (from someone recently made redundant - Pentium2 with a 17” CRT, good for the late 90’s). One of the other guys had 2 PCs and bright blue Silicon Graphics Indigo machine for a 3D modelling project he did - very cool.

As a small office in a global company we traveled often to various mining sites around the world. I only went once, to an Australian gold mine, which I will write about later. Others went around the world. The one place I would have like to have visited was the Grasberg mine in Indonesia - a very large gold and copper mine up a tropical mountain. There was some talk of sending me there to run a training course, but I didn’t act keen and the timing wasn’t good with my other projects. In retrospect I should have volunteered. Irian Jaya is a place that most foreigners (or even Indonesians) do not get a chance to visit. There were always good stories about visits. During the Asian financial crisis in 1997 one colleague visiting there managed to run up an enormous 5 digit expenses bill - he occasionally told snippets of the story of his few days living the high life. Management were aghast, but I had the sense they were slightly impressed with the ability to spend so much when the local currency was so cheap.

Soon after I declined the trip to Grasberg one of our staff visiting the mine was threatened with a spear when some locals bust into the onsite offices. I think it turned out to be a dispute over a pig, but management was greatly concerned as there is a low-level insurgency in the area (over independence from Indonesia). No one from our office ever went there again.

Working at R&TD was fairly pleasant on a day-to-day basis. It was small enough for us all know eachother, and there was a slight siege mentality - us versus the off-site management wanting to shut us down. Everyone got a mug with their name (or nickname) printed on it when they started work. This stopped the problem everywhere else about disappearing mugs/cups. I still have mine 12 years later. When an eclipse occurred we all headed outside for the afternoon to see it. There was a social committee which arranged various regular small events. I was actually a member or the committee for a while. I arranged the Christmas Party river cruise right before I left. In fact I didn’t go to the party I organised, it didn’t seem right as I quit and left a few weeks before the event.

I also tried to get involved in the company superannuation/pension plan. They had elections for staff representatives on the plan’s board. I thought it would look good on my resume. Most of the people I worked with acted bemused when told I was running. My campaign was fairly weak, consisting mainly of writing a blurb for the company magazine (As did all the other candidates). In the end I think I got about 20 votes, not even half the people I worked with. The winners got thousands of votes.

After I had been at Rio just over a year, the work starting slowing, senior management swapped jobs and a review was announced. It seemed like the end was nigh. I knew the redundancy policy very well (as did everyone) and until I had been there over two years I would receive very little. It seemed unlikely I would make it that far or be promoted. It is best to jump than be pushed so I looked around. Finding a job in the dotcom boom was not too hard, and I left after 18 months at Rio. A few months later all but a handful of my ex-colleagues were sacked and the facility shuttered. My timing was just right.

My last memories of working at Rio were having competitions with the aspiring DJ next to me over who could leave earliest. He won by leaving at 3pm, walking past the General Managers office and saying goodbye before walking out. I didn’t have the balls to top that even though I had quit. On my last day we all went to the pub for lunch. I left about 4pm, my manager and most of his team were still there (and stayed late into the night). He teased me for leaving “early”.

Continued with details of the tasks I performed while at Rio Tinto.