This excellent game is evil. It is a succubus come to drain your time away. After a few little abortive starts just to learn the rules I played a proper game all the way from 1066 to 1453. It took over 70 hours! And I could easily play it again (indeed I plan to do so, just not for a while).

In Crusader Kings II you take the role of a Count, Duke, King or Emperor and their heirs. Guiding them through the years in dealing with their liege (if any), their vassals, crusades, jihads, and the Mongol invasion. There is no imposed winning criteria, players can make their own goals: create a large empire; conquer Spain for Christendom; participate in the Crusades. There is also DLC for playing Muslim for Byzantine players, but I haven’t tried them yet.

The game is strategic in nature. Battles are fought when two opposing armies occupy the same county and the outcome is determined automatically by the computer. Instead gameplay is about keeping your vassals from revolt, handling your court and most importantly ensuring a smooth succession for your heir. Conquest revolves around finding a reason to declare war (you have to have a valid reason) and then the logistics of building and positioning your forces. Definitely more a thinking and planning game.

The epic nature of the game lends itself to player created stories spanning generations. RockPaperShotgun started such a series, but it seems to have stopped after a single episode. I found myself constructing a narrative of the mad Count Loinsech’s quest to unify Ireland. His Mongol descendents completing the conquest of all Britannia. Below is how the game ended at 1453 (the game-enforced forced end-date). Count Loinsech of Munster’s heirs 12 generations later control all of Britannia and southern Norway. Relatives also rule over Denmark, Poland, Finland and what is left of France. 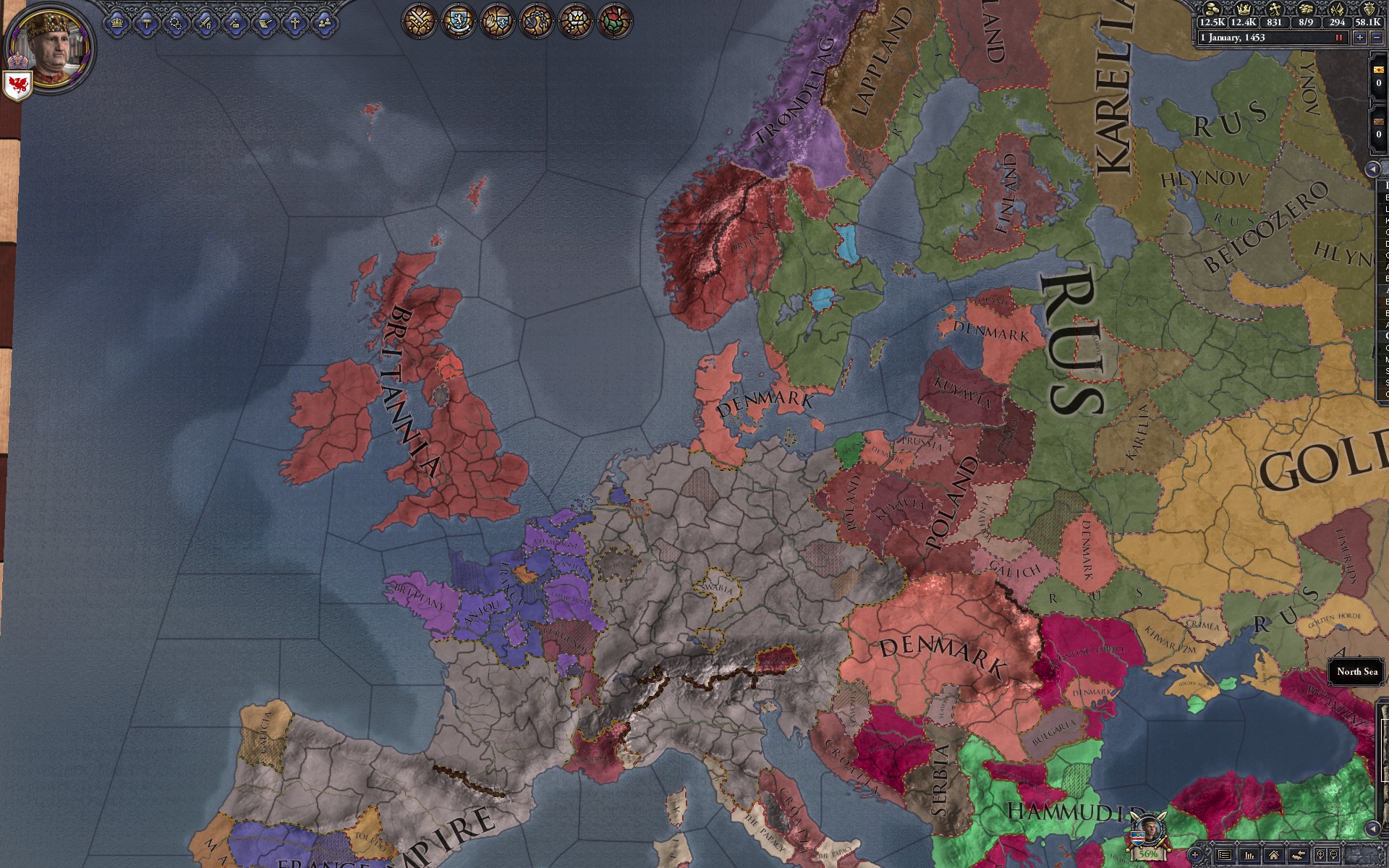 During this game the three big tasks were succession planning, war planning and placating or defeating my vassals. Every time my current ruler died, their vassals would become unhappy. Large scale revolts often resulted if the new ruler was unable to immediately stamp their authority. Queen Lann the Cruel spent nearly her entire 12 year reign putting down revolts in Scotland and Wales, largely because she was a women with a female heir and my vassals were misogynists (a viewpoint probably strengthend after they spent the last few years of their lives in her dungeon). Patrick the Unready took 10 years to pacify his subjects after ascending to the throne at the age of 8. This was despite preparing for the event by hiring thousands of mercenaries and positioning them near the worst troublemakers (I’m looking at you Duke of Cornwall and Duke of Galloway).

To help avoid revolt upon succession, careful planning is required (although a large, well funded army doesn’t hurt). This means marrying well, ensuring your heirs are well-educated and pretenders are isolated (or killed). Still it can all go wrong or right based on luck. Queen Lann only came to power after she assassinated her younger brother - an event beyond my control. King Putiata lived to be nearly 90 and survived all his male sons and grandsons. His great grandson was not part of his court and so out of player control, I just had to accept what the game had generated. Luckily, Putiata had been preparing for his death for 30 years and the transition was smooth’ish. I wonder though what would have happened had King Puiata lived another 4 months to see his last son born (randy old bugger). Born after his father’s death, Eric didn’t inherit Britannia, but did inherit Denmark from his mother.

War basically comes down to planning and then using overwhelming force. It seemed that in battle the larger force won approximately 90% of the time. Thus it was far more important to ensure you had enough money to finish a war (sieges take a long time) and a good reason to start a war. The later could take a long time to engineer. So it often came down to a waiting game. In conquering England, I had to wait until they were already involved in another war and then quickly sneak in and take a county at a time. By the time I had a quarter of the country I worked to destabilise the Kingdom enough to keep it in a constant state of war so my forces could continue their slow progress. Apart from religious war (which I never tried) conquering a decent sized opponent in this game is a multi-generation endeavour.

This game has that “just one more turn” feeling. Despite its large scope there is almost always something happening that require attention. It is very good and very addictive - beware!