I have now arrived and am (somewhat) settled in Kuala Lumpur. Internet access has been restored and our baggage has even arrived with no problems. Below is the Fort Kickass we created out of all our worldly possessions. So far, so good. I am setup and ready to start work again - although I writing this to delay that start another hour or two. 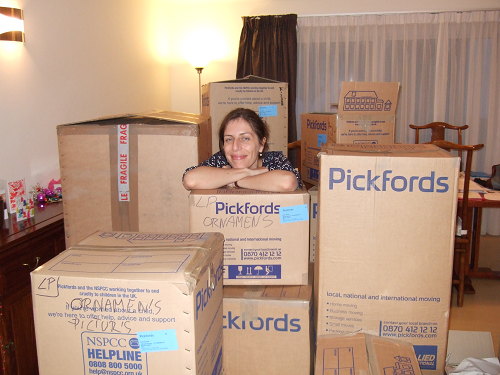 My first impressions of Malaysia were heat and buildings. The city is a near constant 30 degrees Celsius during the day and the nights are warm too. Transitioning from a frosty London winter, the change was a shock, but a pleasant one. I prefer the heat. I was worried about the humidity in this jungle city (different to the desert city I grew up in). However, it has been fine. There has yet to be the oppressive combination of heat and humidity I remember during Perth summers when a cyclone is passing through up north. Instead it is a constant background heaviness in the air to which I’m becoming acclimatized. Perhaps the regular rain storms help clear the air. Right now is the tail-end of apparently one of the wettest KL rainy seasons for many years. It rains nearly every day for a few hours (usually in the afternoon). The rain is very heavy and would quickly drench anyone caught out in it. Although having been caught in a few storms, it’s not that bad, it is never cold, just wet (as if you jumped in a warm pool with your clothes on).

The rain also quickly overwhelms any drainage systems on the footpaths forming large puddles. That is, if there are footpaths. KL is not a city designed for walking. The city has grown from a small town in the jungle into a modern city hand-in-hand with the car. Both the car and omnipresent air-conditioning have greatly affected the city. The general lifestyle appears to be one of driving between houses, offices and shopping malls with only short walks if your destination is very nearby. I haven’t seen much “al fresco” living.

KL is a growing city, and the direction of this growth is upwards. We are staying in a low rise building near in the business part of town. It is surrounded on two sides by high-rise towers (blocking the view of the twin towers). The other two sides are taken by a 5-floor apartment block and an Embassy compound (apparently built on an old tin mine thus unsuitable for high rise development). The building has been sold to developers and will become another tower. By which point we will have moved into another tower. The new apartment will probably be very large and nice by London standards, thanks mainly to it being very, very cheap by London standards. Still more towers are being built. A 10 minute walk to KLCC takes us directly past 3 construction sites, with several more visible close by. 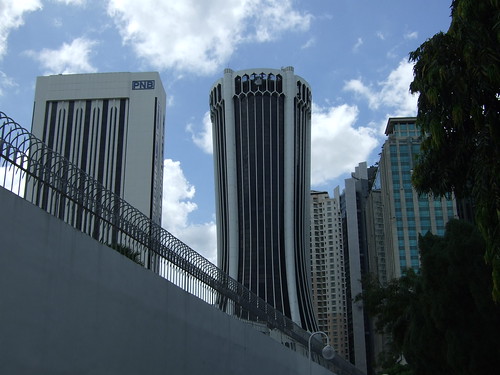 Apart from the humidity, my other concern about KL life was the availability of pork in a Muslim country. I needn’t have worried. There are religious police in Malaysia, and it is illegal in to serve alcohol or non-halal food to a Muslim. However, KL itself seems to be more relaxed than such laws would suggest, perhaps because of the wide mix of ethnicities here. Access to non-halal food is possible, but not unimpeded - you have to go looking for it. I’m sure an obviously Muslim person would be refused pork and beer no matter what, but in the cosmopolitan city with many Chinese, Indian and Caucasian people, religion is not always clear. Chinese or Western places are a good start. There is a Spanish restaurant called “El Cerdo” (the pig). At one Chinese restaurant we were explicitly asked if non-halal food was acceptable. At a Japanese supermarket the pork products are tucked away in a corner with its own till and non-Muslim serving staff. Your purchases are put in covered bags and not to be touched by staff outside the special area - buying bacon is like buying porn. Alcohol is easier to find. There are bars in the city (although not as common as London) and most supermarkets have a small selection of alcoholic beverages. Prices are around the same as London - so very expensive by local standards.

Food here is cheap. Supermarkets in this part of town have a good selection of both local and international food stuffs (especially Australian). The local stuff is cheap. However, anything imported is relatively expensive. Sometimes I think it would be cheaper to eat out for every meal than buy and cook food at home (I must be going to the wrong markets!). Within 5 minutes of where we are staying there are easily a dozen restaurants and 4 food-courts. This density shows no sign of dropping on walks further out. Everywhere we have eaten has been good and everywhere is cheap. It would be hard to spend more than a few pounds for a large delicious sit-down lunch at a food-court. Today while waddling out of a new restaurant, I was surprised at how expensive my lunch was - £3. The only caveat is you must like spicy food to eat locally. Also, you must like sugar in your drinks. If you say “no sugar” it is translated as “just a little sugar”, otherwise there will be a ton of sugar in whatever drink you order.