Last weekend some people from the High Commission and their friends went shooting. We went to City Square Shooting Gallery here in KL and spent the afternoon learning how to safely shoot and then firing Glock 17s (“law enforcement’s favourite”) at their indoor range. It was good fun and I’d happily go again sometime.

The event surprisingly took most of the day. We originally thought it would be over after a couple of hours, but it went for nearly 5 hours (not counting transport). Luckily, lunch and drinks were included. A couple of hours were taken with safety and training briefings. There was a huge emphasis on safety - and rightly so. They said at least one of us would be stopped by an instructor aswe tried to turn around and talk to the group with a gun in our hand - and sure enough someone did (not me!). After the training it was off to the range. 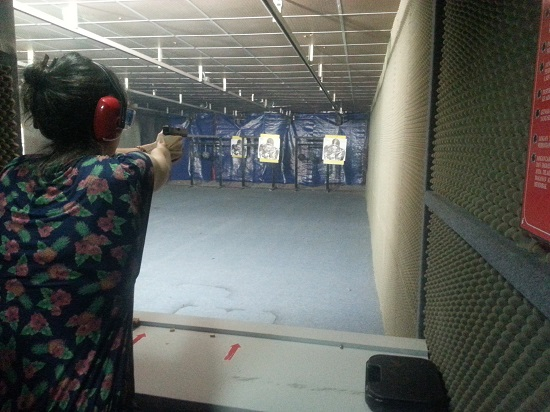 We practiced firing at targets 6, 11 and 15 metres distant. I found it surprisingly hard. The recoil was strong and the gun would kick alarmingly. I was concerned it might jump out of my hands. As a result I held it ever tighter trying to stop the movement. My hands and shoulders became quickly tired. After a while I learned to trust I wouldn’t drop it and relaxed enough to improve my aim. My practice session shots weren’t very accurate. My eyesight became fuzzy after a couple of shots and constantly required a short rest to even clearly see the sights at armslength. There was also no immediate feedback - I couldn’t see where the bullet was going. Falling back on old archery memories I focused on a repeatable action rather than a high score and was pleased to see a reasonably clustered set of shots regardless of the distance.

Then we had a short competition for the inaugural (handmade!) shooting trophy - 5 rounds at each range. I adjusted my aim, closed my eyes briefly after each shot, and regularly relaxed my arms between shots rather than keeping them permanently tense. In the practice session, my aim was low and to the left (apparently a strong sign of dragging the trigger with a rough action). So I just aimed a little high and to the right. I didn’t expect to do very well - 3 of the participants were ex-military and a couple of others had been before. Thus I was quite calm after firing the first 10 rounds. It was a surprise to see I shot a 48 out of 50 and was a long way in the lead with only 5 rounds at 15m to go. I was much more nervous for the last 5 shots and could feel my beating heart. I was surprised by 3 of the shots firing as I didn’t realise how far the trigger was depressed at the time. Sure enough 3 of my rounds (which I assumed to be the unexpected ones) went low. However the other 2 bullseyed for a final score of 64/75, just beating the second place 62. I won the trophy (and bragging rights) which now sits on the living room cabinet.

After leaving the range with the trophy we had some difficulty catching a taxi. Many drove past us and one made a strange waving hand signal at us. When one finally stopped and I got in, the driver’s first words were “is that a gun!”. I had to give him the trophy so he could see it was a toy before he would take us home.