Eve Online is a game I have consciously avoided over the years. Not because I thought I wouldn’t enjoy it, but because I might enjoy it too much, and thus see too much otherwise productive time slip away (Minecraft is another game I avoid for similar reasons). However, recently the game had a Humble Bundle sale so I thought I’d give it a try. After all, I’m writing a vaguely similar game (albeit single-player) and have pretensions towards writing more games along a similar theme. It would be remiss not to experience, and try to learn from, one of the giants of the genre - a very successful game over a sustained period of time. Or at least that was my justification. 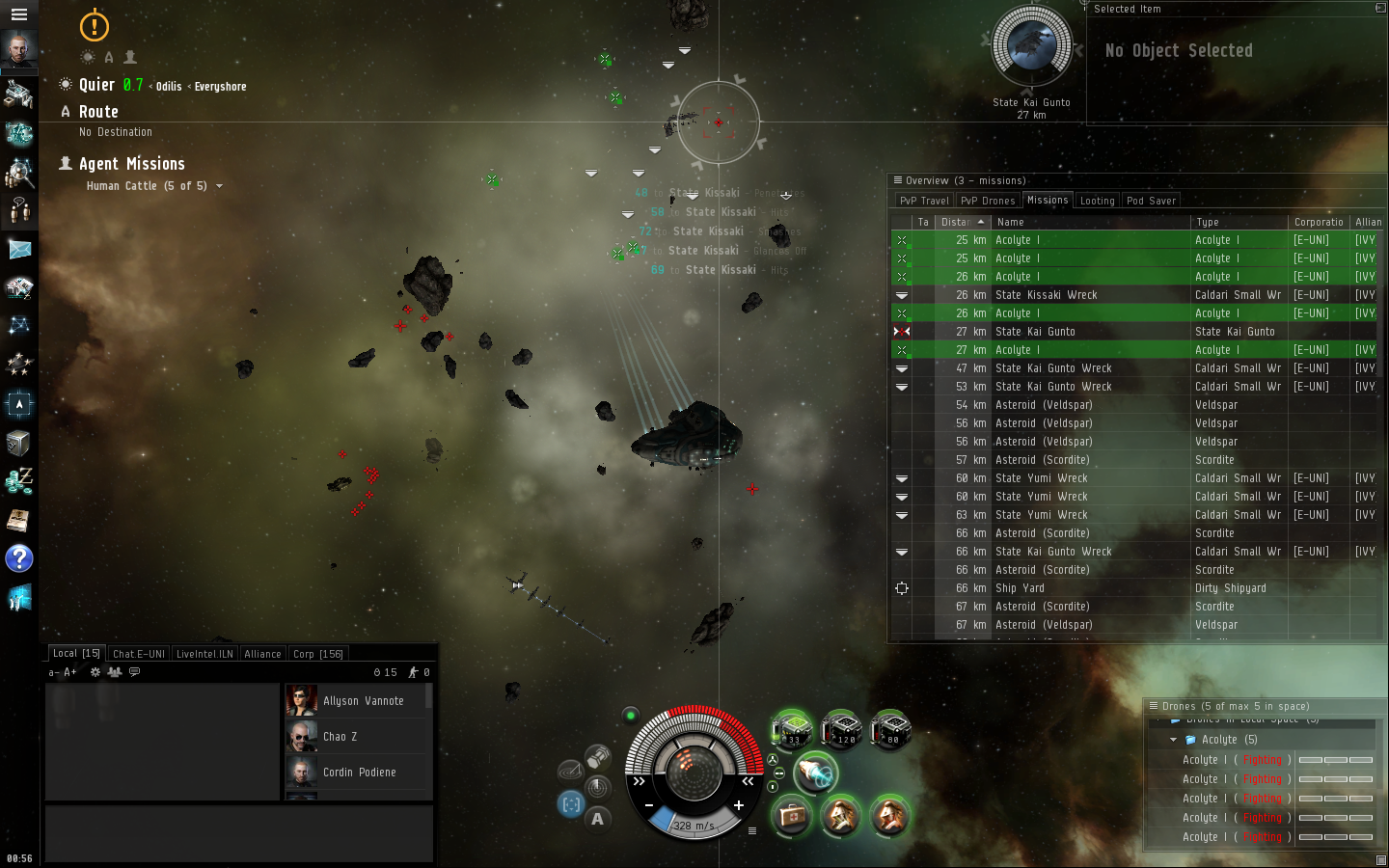 While on the surface Eve Online appears to be a spaceship combat and trading game similar to the old Elite game, some have described it more akin to a spreadsheet simulator. After a playing for a little over a month, I agree more with the latter viewpoint. A player doesn’t fly their ship - they more command it; go here, shoot that, loot this. Rather than the fast reflexes of a flight sim, the game plays more like a real-time strategy game. The skill comes in choosing the correct tactics against your opponent and selecting the right equipment to execute those tactics. This relies on two aspects of the game I particularly like - the economy and skills system.

The Eve economy is not optional. If you play the game for any period of time then you will need to buy something or will have something to sell. The market gives the appearance of being largely player driven. Some sense of supply and demand is applied too. Although like all MMO’s I know about, Eve respawns NPC enemies, loot and resources (so the supply of at least the basic goods is huge), it also removes a huge amount of these same resources through the destruction of ships in Player-vs-Player (PvP) activities. Players can also craft the in-game equipment and sell it. There is a thriving community of players who mine basic resources, research blueprints, manufacture goods, transport them to marketplaces and/or actually trade them. There are a number of in-game roles beyond the standard combat-focused careers. I like the idea of the economy, and Eve has implemented it well. I sometimes wonder if it would be possible to go further and make a multiplayer game which has economic scarcity to create a more “real-world” supply and demand system. That is, a game where there is no “respawning” of non-renewable goods and the renewable ones presumably take some time to replenish. Similarly, in this imaginary game everyone needs to buy or make their own goods, even NPCs. If the game wants to give a new player a starter ship they can’t just magic one into existence, they have to use the economy system to obtain it. The idea is to make the in-game items act less like digital goods and more like the physical goods they represent. Of course this doesn’t work well with modern games, where people often grind and exhaust the environment like a plague of locusts. I believe the Ultima Online game worked like this, but the gameworld was soon stripped by players. Eve probably straddles the concepts of “fun” and “realistic economy” as far as a game can manage.

Part of Eve economy’s importance is facilitated by the connection between in-game money and real-life money. This is in the form of PLEX which is equivalent to the monthly subscription fee in other games - one PLEX allows a month of play in Eve and can be traded within the game itself. This is how those dollar costs are calculated after battles, like this battle that destroyed US$300,000 worth of equipment. The PLEX system is a brilliant idea. The only change I would make is to make the denominations smaller. Break down PLEX into daily units, instead of a month of time with a real world value of US$20. That should increase liquidity.

There are a huge number of skills in Eve, and they completely determine a player’s capabilities. Want to fly an expensive Titan worth thousands of dollars? First you need to learn dozens of skills. Unlike most MMO’s, a character’s progression is not determined by killing monsters. Instead it is just determined by time. The player sets up a queue of skills and over time they are acquired. I like this idea, it is a small movement away from the grind present in most online games (although Eve just replaces it with another grind). It also means progression is not related to how much time is put into the game. All that is required is logging in occasionally to replenish the skill training queue. There are so many skills it would take an estimated 20 years of time to perfect them all. Thus players need to specialise, another good thing in my book. It also means players who have been around longer (and this is a game that has been going for a decade now) are better than new characters and probably always will be. This doesn’t seem completely fair to me, older characters should have an advantage, but having it extend so far seems excessive. Newer player should have a reasonable chance to reach the pinnacle. Rather than a 20 year ladder, maybe a much shorter year or so ladder would be less of barrier. However, that would restrict the scope of the game and the opportunities for specialisation, so I’m not sure how any such change would work.

Another thing I like about Eve is that it has an API so various external tools can hook into its systems and provide views and/or updates. It means the game exists beyond logging on, and the devs can spend their time working on improving the core experience, leaving others to provide pretty user tools (the game definitely needs user tools). 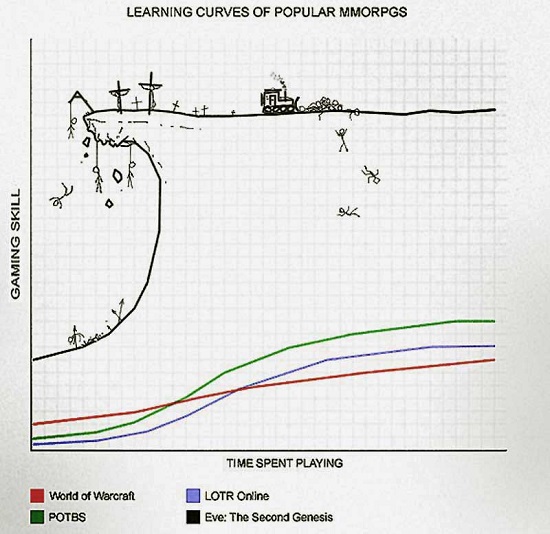 There is also much to dislike about Eve. The game is somewhat indifferent to new players and sometimes borders on completely hostile. It is extremely complex, so it takes some time to understand the basics of what is happening around you. During this learning time a new player is still open to be scammed or killed. Eve is well-known for its PvP play - I would suggest that PvP is the core Eve experience and a player should expect it. Still it would be nice to have a respite while learning. There is high-security space, but PvP here just has repercussions, it is not forbidden. Thus there are activities like “suicide ganking”, where the idea is to troll new or non-PvP players. I’ve heard it referred to as non-consensual PvP. This seems very unfriendly towards new players. I get the distinct impression that the game has trouble attracting new players beyond their trial periods (thus things like the Humble Bundle). I think non-consensual PvP, complexity and the time-based skill system may not help the developers here. I don’t know how big the hardcore PvP market is, but I would hazard a guess that by now Eve has seen most of that potential market already (obscurity is not an issue for Eve, the game gets good press).

The new player problem, may be hidden somewhat by “alts” - or players having several accounts and player characters. I would guess that most regular players have at least one alt, so the population of the game is much smaller than advertised. Alts are necessary because of the specialisation. It seems that players have a character for PvP activities, another for trading, another for mining, another for haulage, another for manufacturing, and so on. I suppose this is good for the developers. I can’t think of a reason why it should be a problem, but it does seem strange to me and must require a large cognitive and time commitment to the game. Good for them, I suppose.

I’m not sure I will play the game for the long-term. Although there is much to do, most of it seems to be “grindy” and repetitive. It is clear that PvP combat is the intended endgame. That is where the “fun” is, along with the emergent gameplay. Everything in the game is built to support PvP. Although it takes some time to be skilled enough to join the PvP ranks successfully and I’m not sure I’ll be able to push through the grind to get there.

Oh, and the last annoying thing about Eve is that is is very unstable on Macs (or at least my Mac).

If you want to give the game a try, you can get an extended 21 day trial using my reference details at this link.