In a burst of enthusiasm for games right before the last Steam Summer Sale (in June) I played a number of games in my library in an attempt to increase the played game percentage. Now 15% of my Steam library has been played (up from 10% beforehand). It would take a lot of time to clear that backlog! However, in a fit of perversity, most of the games I played in that burst were games I was unlikely to enjoy - so it didn’t take too long to decide to abandon them. Anyway, from best to worst, here are my short reviews from those games.

As before my ranking system falls into 3 broad categories: games I have finished or want to finish; games I played for a while, but may or may not play again; and, games I deleted from my spacious hard drive after an hour or so.

Mark of the Ninja is stylish 2D side-scroller action game with a stealth mechanic. You are a ninja investigating an attack upon your dojo. Thus you creep and swing your way through various buildings avoiding, or if necessary, quietly disposing of the guards. Guards can detect you via line of sight (so disabling lights, or going through the ducting is very handy) or noise. It is very easy to see what is happening and how your actions affect the guards. Very impressive UI design. Puzzles seem to be logical and combat is dangerous and to be avoided. The game is also beautiful, done in a cartoonish style - mainly in black with occasional flashes of bright colour. I intend to complete this game. 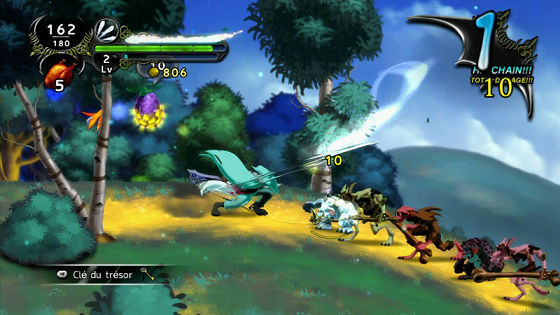 Dust: An Elysian tale is another pretty hand drawn 2D sidescroller action game, but instead of stealth the player just fights their way through the huge mass of enemies that assault them. There is a semblance of story, as the player struggles to recover their memory as monsters roam the countryside, but it seems fairly unnecessary. Basically it is fight, fight, fight. And the fighting is surprisingly fun. The player’s avatar reacts nicely to commands and feels powerful, with the special actions being particularly destructive in their devastating effects. My only concern is how quickly I progressed through the game. While entertaining, none of the battles were challenging - every fight was won with ease, and I’m not a great gamer. I stopped about half way through, and am not sure whether I will return.

Trine 2, another 2D sidescroller action and puzzle game. This is a very polished game, but it doesn’t have any hook to make me want to play. In the game the player controls 3 different characters each with their own specialties: a wizard; an archer; and a fighter. Together (often swapping back and forth between them) the three fight various monsters and solve puzzles to save some macguffin. The emphasis is more on the puzzles than the action, and many of the puzzles overly relied on manual dexterity. I could always see the way to solve a puzzle, but often it took me some time to actually complete it as the controls defeated me, rather than my plan. This is still on my hard drive, but realistically, I’m unlikely to play it again. 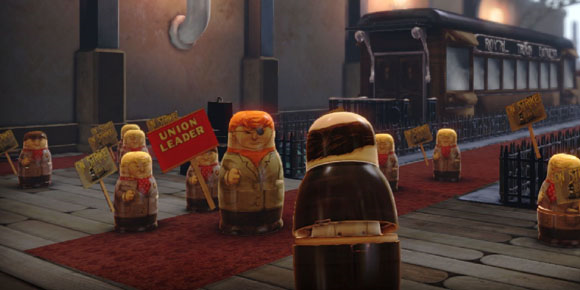 Stacking is a very original puzzle game. I found to hard to decide where to place this - I could have easily put it about 3 places lower in the list. However, I did finish the game (it is quite short). Also I appreciate the interesting idea and art style. In the game you play as a small matryoshka doll and solve puzzles by jumping into progressively larger dolls, each of which has a special action. The puzzles are quite easy and there are various levels of hint available including the downright explicit. There are also multiple ways of solving each puzzle which is nice. The art style is as a 20’s silent film including appropriate music (although the game is in colour). It is a cute, but ultimately unsatisfying game that doesn’t outstay its welcome.

A Virus Called Tom is a puzzle game where you play a computer virus shutting down the systems of your creator’s enemy’s products (for example, one level is deactivating their moving walkway). This is achieved by rotating squares on a grid so that the pipes drawn on them connect up. Sometimes the difficulty comes from other virus’ acting against you, sometimes the timer means the puzzle must be solved very quickly and sometimes it is just a brain teaser. I enjoyed the later, but the other puzzle types were less enjoyable to a slow old man like me. The game has a nice feature allowing some levels to be skipped, so I got further into this game than I would otherwise. However, towards the end I hit a wall of impossibly fast (for me) levels. This is so nearly a very good game, but doesn’t quite make the grade it for me. I enjoyed most of my few hours playing, but it is deleted now.

Guacamelee is another 2D side scroller action platformer. In it you play as a mystical Mexican wrestler fighting other wrestling creatures in a Mythological Mexican setting. Very cool and the game started well. But then at the first boss fight I had serious issues with the controls. My avatar just wouldn’t react in the intended manner. I’m not sure if it is my poor gaming skills or poor Mac controls (unfortunately very common, Mac support often seems to be an afterthought), but it hugely diminished the fun. Then there was a long platformer section of the game which got me bogged down, so I just stopped. An interesting and stylish game, but not for me.

The Swapper is an indie favourite 2D side scrolling puzzle game. You control a faceless spaceman (in a spacesuit) exploring a seemingly abandoned station. To solve puzzles, the player can create clones of themselves which move in sync with the main character (but from a different starting position) and also swap who is the current main player between these clones. This game is very clever and I enjoyed the first 30 minutes of so, but then I started having problems with the controls. There was one problem where a clone needs to fall slowly down a wall I just couldn’t complete. I checked out the solution on Youtube, but still could not get it to work for me. Poor Mac controls again? In any case it stopped me moving forward and the game was deleted.

Wizorb is basically an Arkanoid clone in a fantasy setting (you have some “spells” to cast) with retro 8 bit graphics. I was mildly amused by Arkanoid in the 80’s, and was similarly mildly amused by this game.

Beatbuddy is a rhythm based platformer set underwater. The player’s avatar floats around the screen and gets past obstacles by moving or acting in time to a beat. Interesting for an hour or so, just to see how it worked.

Offspring Fling feels like a throwback to the old platform games that were around in the 80’s. Old school enjoyment for those that like that sort of thing. However, I didn’t such games the first time around, and I’m still not keen on them now. Deleted.

If someone was to try creating a game with the specific intent of it being the sort of game I don’t enjoy, then Beat Hazard would be a very good attempt. It is a bullet hell space shoot’ em up where fast reflexes are required. I don’t have them and didn’t play this game for long. It’s pretty though.

Bad Rats is a bad physics based puzzler. The player has to position rats and various components in order for a ball to kill a cat. The tutorial has bugs in it and I couldn’t work out how things should work. I stopped after two puzzles because a bug meant I couldn’t complete the level. The artwork is not good and in a “bad” 70’s/80’s NY punk style (graffiti, brickwork, baseball caps). I hope this game didn’t take long to write. Deleted.