About 2 hours before completing The Walking Dead my opinion of the game changed, again, for the second time. At first I liked it, then I found it disappointing, but by the end I had grown an appreciation for the game. It is very enjoyable and has probably the best story in any game I’ve played. Overall, I say it is definitely in my top 10 games (since restarting gaming in 2011), but not the top 5. Still a very good game.

The Walking Dead is a Telltale game based on the comic book of the same name (which now also has a TV series based on it too). For those not familiar with Telltale’s distinctive style, it is a story game where the player is given a choice of various dialogue or action options. The game then promises that other characters will remember those responses and act appropriately (a little message often pops up like “Kenny will remember you supported him”). These interactions are interspersed with point & click puzzle scenes and quick time events. The games are told in an episodic manner, each episode rising to a crescendo and often a cliffhanger for the next. The first episode of a game is often available for free download if you just want to see what its like - The Walking Dead episode 1 download is here. Telltale games’ art style is usually comic book like (so this one fits in great with the source material). 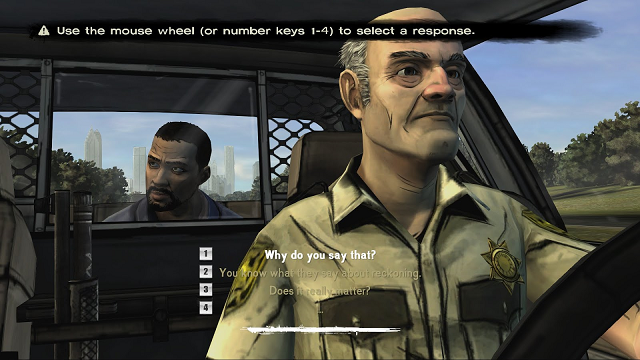 At first I was amazed. I was making these decisions and they were affecting the story! Imagine the number of possibilities. Then by the second episode I realised that I wasn’t really changing anything. The game may tell me that people would remember, but it didn’t seem to make any significant difference. This is understandable. It would be a programming and artwork nightmare to allow a significantly branching story. Instead the game branches out for no more than a few minutes and then returns regularly to known narrative chokepoints. The main story beats (about one every 30 minutes of gameplay) are fixed. Furthermore, these moments are binary, the same two possible choices are always presented regardless of previous actions. When it became clear to me how the game was working under the hood I was greatly disappointed - it is not what I thought was promised. It is definitely not a choose your own adventure. This combined with the point & click sections of the game being either very easy or devolving into annoying repetitive “hunt the pixel” puzzles and the always irritating quick time events (some of which are designed to be failed) started to put me off. However, the story was good, and its not too long (each episode being around 2.5 hours) so I thought I’d keep going.

I’m very glad I did finish it. After a few more episodes (including the obligatory and cliched cannibal encounter) I began to see the point of the game. It is not supposed to be a complex and branching story at all. That conceit exists just to get the player involved and connected to the characters. The real game is all about those binary story beats. They are actually moral conundrums. The rest of the game and its faux decisions are just trying to make the player care enough to consider them properly and weigh the possible outcomes. They are decisions like who gets food, or how much effort you make to save someone’s life in the face of personal danger. Big questions, often with no good outcomes, just equally bad, but slight different consequences. Such questions are easily dismissed within most games. People die in games (and other forms of entertainment) all the time - so what. The “trick” of The Walking Dead is to add in all the other stuff around those decisions to make the player take it seriously. And it works - largely. Most of the time I did weigh the options carefully. In the end I didn’t even mind the quick time events, they served to add some sense of jeopardy and action into the story - stay awake! I also liked that at the end of each episode the big decisions you made were highlighted and compared to other players’ decisions. On average I went with the same decision as the majority, but a few times I was in the minority. This mechanic allows the player (me, at least) to rethink their decisions when the pressure is off and consider other points of view - I stand by all of them!