As an experiment, I recently recorded my first Let’s Play on YouTube. The chosen game is the pre-alpha demo of Wartile - a tabletop inspired tactical combat game with a Viking theme. The video’s concept is to look at the game from the point-of-view of a another game developer and talk about the design of the game as well as the gameplay. I might do more similar videos in future.

The TL;DWatch version is that Wartile is is a fun playable demo and the game is already very pretty. It is a good base on which to build a great gaming experience with a bit of extra polish. For me, one issue is that the core game mechanic feels a little confused. Some parts of the game suggest a turn-based game, but it plays as a real-time game.

In the Wartile demo the player controls 4 sturdy Viking warriors about to ravish the British isles. Or, at least loot a small monastery for a bit of coin. For some reason the Vikings have chosen a surprisingly well defended religious institution. There is a watchtower and they are outnumbered at least 3-1 by English soldiers. Luckily the defenders are spread out and are very dumb, preferring to stand idly until the Vikings are nearly on top of them (well it is pre-alpha, can’t expect great AI at this stage).

This monastery level is gorgeous. The graphics are beautiful in a tabletop inspired way. The ground is broken into hexes, all the people are modelled as figurines with bases, and, the waves are frozen at the point they crash upon the rocks (but a ship’s sails actively billow in the wind - strange). It is a board gamer’s dream, imagine how cool it would be to play a skirmish war-game at your local game-store that looked like this! Well, now you can on your computer. To help show off the graphics, the camera is player controlled and very mobile (zoom, rotate and pan in two dimensions). From my experience such camera work makes development harder and the artwork needs to be fully 3D (no hiding the unfinished backs of buildings, like in the movies). Well done to the team for getting it done. 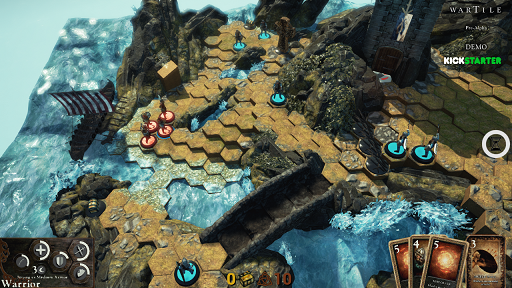 The core gameplay is maneurving your Viking warriors around the board by dragging and dropping them on the desired destination within the movement range of the figure. Then a cooldown timer starts - the figure can’t act again until it has expired (just a couple of seconds). When two opposing figures touch they immediately enter automatic combat. Bashing each without player interaction, unless the player moves their figure mid-combat. The combat is driven by a standard set of combat stats: how much health they have, how much damage they do in an attack, etc.

When defeated, the figurines fracture and crumble - a nice bit of tabletop-like feedback. If it is an enemy it may release a reward in the form of a small action point or coin. Either have to be quickly clicked to gather them, otherwise they disappear forever. Click, click, click quickly. The coins don’t seem to have any benefit, yet. As the game expands they could be used to add a meta-game of buying better equipment and the like.

Collecting the action points is vital. Each player has a set of cards they can play at any time by dragging them onto the board, if they have the action points available to pay their cost. The cards give various combat buffs or healing actions. Some of the cards are for any of the player’s warriors, some are special moves only available to certain figures.

And that is the core gameplay loop. Manoeuvre your figures into good attacking situation, use cards when appropriate, and quickly click your rewards. Simple, but it works well. I had fun trying out various tactics to isolate and surround the enemy, then working out the most economical use of cards. Each attempt at the level was 5-10 minutes and it took three attempts before successfully completing it fully (but I got incredibly close on the second attempt!). So the difficulty level felt about right for me. 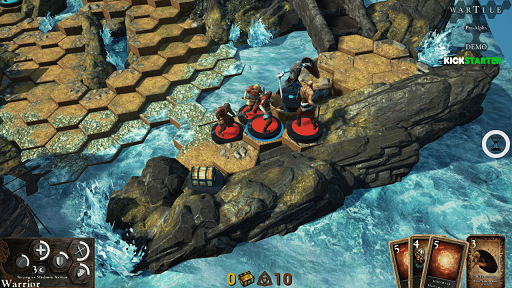 Some of the implementation details are a little rough, but nothing that can’t be fixed. The action points and coins felt small when rushing to click them - I don’t think the clicking mechanic is supposed to be reaction-based mini game, but it can feel that way. Also, the description of the warrior stats and other tips appear in the top-left corner of the screen, rather than tooltips hovering over the pointer. The learning player constantly has to swing their head up to the top left corner to see the description.

Overall, this game definitely has great potential. Especially with adding some meta game or progression between missions with the coins or extra cards or equipment. They could also add a storyline, or just leave it as skirmishes. It could all work nicely. Well done to the dev team.

However, the game did confuse me a little.

The problem is, for me at least, when I first saw screenshots and even videos of this game, I thought, “wow that looks like a great turn-based tactical game”, and of course its not turn-based, its realtime. I was surprised. Even after playing it, the game felt turn-based, and I immediately wondered why.

Realtime tactical game are all about the tension of action. You might know what needs to be done, but can’t do it quick enough. The player has to think fast and execute actions faster. It is often about overwhelming the player, or the enemy. Some parts of Wartile fit this: playing the cards is often tense for me, will I get it done in time? Same with rushing to click action points and coins before they disappear. Also you can slow down time for a bit with a satisfying noise and camera effect.

However, there are aspects of the game that work against that realtime feel. The movement feels strange - figures jump immediately to their destination and then just stay there until you move them again after their cooldown timer expires. That doesn’t feel realtime. It makes it hard to organise coordinated attacks, for instance moving one figure up a hidden back path while the remainder attack from the front. Most realtime games let you give a final destination and the unit will just trundle along at its own speed until arriving.

Here movement (the main this a player controls) is discreet, like a tabletop game, but tabletop games are turn-based. The art style also screams turn-based tabletop with the figures, hexes and static background. As does the way nothing happens if no orders are given. I feel outside combat I could give no commands, instead using the time to thoroughly plan my actions, and the game would just sit there waiting for me. Which is the feeling turn-based games try provide - planning out tactics and then seeing what happens. 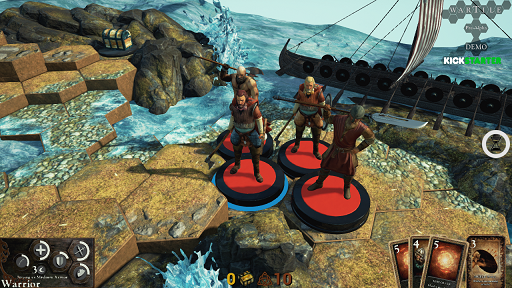 Basically, sometimes the game feels turn-based and sometimes it feels realtime. For me, at the moment, this is just a little confusing and feels strange. I’d recommend committing to one or the other (personally I’d suggest turn-based, but I’m biased). Then again perhaps the developers are aiming for the feeling of careful planning punctuated by hectic combat. It could be a novel game mechanic. Maybe that mix could work, but if so the game still needs some work to reach that ideal. Currently I’m not sure, as a player, what the developers intended - is it about action and tension, or is it about seeing your carefully planned tactics come to fruition.

There is another issue around this game, but not to do with the gameplay. I first became aware of Wartile through its Kickstarter campaign. Liking the game and wishing to see it completed, I considered pledging while recording the Let’s Play. But I couldn’t, because they have cancelled it. Wartile’s Kickstarter page seemed fine. Their video was professional (it got me to download their demo!). The goal was not excessive, and there was a pretty, playable demo. I also saw a large number of other Let’s Play videos and some press in the larger gaming outlets. They had a decent pr push. However, with 10 days left on the campaign, they were only on around 45% of their target amount - not even close. I feel for the dev team. If I was putting this on Kickstarter, I’d be quietly confident of funding successfully. Maybe the Indiepocalyse has claimed another victim. I’d love to hear from the developers why they think it didn’t work out.

Anyway, good luck to the team. I hope you can still finish this game, as I really want to see how it turns out.