...And Then We Hold Hands 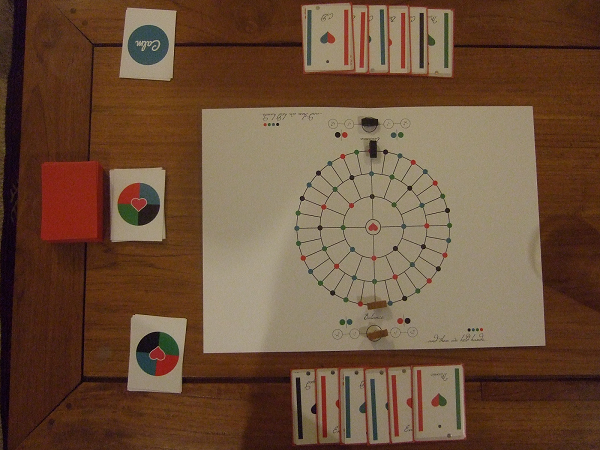 …and then, we held hands is a very interesting two-player only, cooperative board game, available for free print & play (P&P) download or purchase. Despite having an abstract design it is incredibly thematic.

Originally developed in just 48 hours as part of the 2014 Global Game Jam, this board game went on to win best Golden Geek Print & Play and earn a proper published release. However, the rules of the GGJ state that all games must be released under Creative Commons, so it will always be available for free download, as long as you are willing to create the components yourself. This review is for the free P&P version.

The aim of the game is for both players to move into the centre of the board (heart circle) in the same turn and in emotional balance. This is done by reaching a number of intermediate emotional objectives (i.e. board positions) by playing cards that match one of the four emotional states depicted (happy, sad, calm and angry). Thus if the goal is to reach a sad emotional position, and to get there requires passing through happy and angry positions, then the player must play a happy, angry then sad card in that order.

Card order is important as each card changes the players emotional balance and they are not allowed to go too far in any direction. There is also the bonus that after any move the player finishes balanced they can refill their hand of cards. If they don’t have the required cards for a move, then a player can use their partner’s cards too (but they don’t refill if finishing balanced). So players have to work together to meet their goals, sometimes using each other’s card, while at the same staying balanced. Oh, and this should be done without communicating strategy. Seriously, one of the game’s rules is that players should not discuss the game, they can talk about other things but not collaboration. Instead the players need to just anticipate their partner. 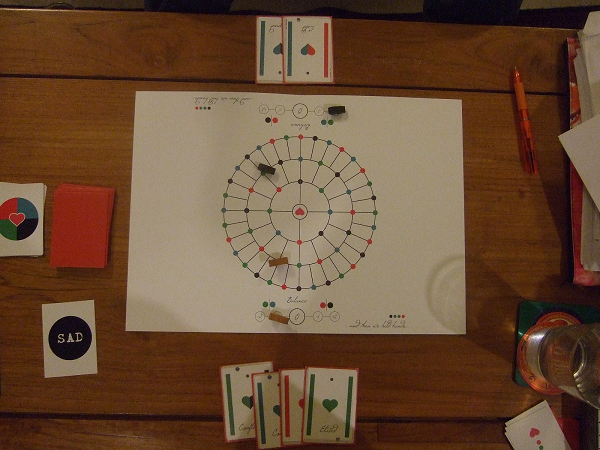 From those simple rules comes an amazingly thematic game. So many allegories. Some comments while playing included: “you go too fast and suffer wild mood swings”; “I’m always ready to move to the next level before you”; and, “sometimes we both need to be in sync”. I was deeply impressed how well it captured the emotional give and take of a relationship, while just moving around an abstract board! We played a few times, but only won once, the other times we “broke up”. The victory came with a little cheating on the collaboration rule. I suspect most games would last about half an hour, at least getting close to the endgame. Luck plays a reasonably sized role and the last bit is the most difficult. The pieces are very pretty (with the professional version looking even prettier). The only downside of the game is that the P&P rules are atrocious - they must have been written in a rush at the end of the game jam. I strongly recommend downloading the rules from the professional version (rules here and faq here) - that is the only way we could work out how to play.

My partner described the game as “cute, but I prefer to talk [about strategy]”. I think its an excellent idea, well executed and worth a try. 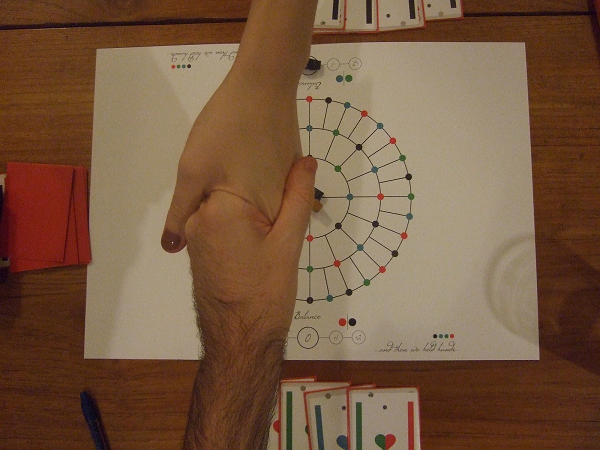 …and then, we held hands is available or free as a P&P file download from BoardGameGeek, or a professionally produced version for US$22.65 from Ludicreations.