Just over a year ago the small casual gaming group I play in started the board game Pandemic Legacy Season 1. Just under a month ago, after nine game sessions, we finished. This is a review of the game and does not include spoilers. For a game-by-game account of our playthrough (including spoilers!) see these pages instead. 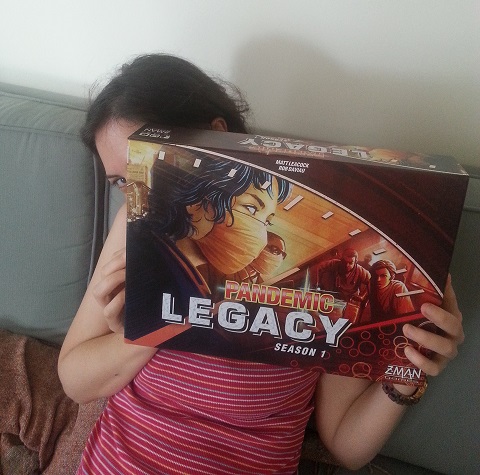 Long-time readers may remember I wrote about Pandemic as my favourite boardgame some time ago. Pandemic Legacy is an extension of that already great game, built on top of the old rules. It is still the same cooperative board game where 2-4 players act as a team to combat and cure disease around the globe. However, it adds a series of legacy elements. After (and sometimes during) a game the rules may change. New actions or elements are added, others are removed or modified. The game comes with a bunch of stickers (some hidden, some visible) and closed boxes of extra cards or components. The board, rulebook and characters all have blank spaces where these stickers maybe placed to modify the game. There is a special deck of cards with conditions for turning over the next card - these reveal the changes necessary at that point.

This is an amazing idea, and the game implements it extremely well. The changes tell a story about the pandemics gripping the world over the course of a year. Each game of Pandemic advancing the fiction by a month, although a month may be replayed if the first game of the month is lost. Thus, a complete season is 12-24 games. Using the word “season” is intentional. The designers have stated their aim was to recreate the feeling of watching a boxset TV season. They succeeded. The game maintains tension from the initial discovery that this time the pandemic is different, leading to escalating problems, and eventual redemption.

It is hard to say more about the specifics of the game without providing spoilers. Pandemic Legacy deviates dramatically from standard Pandemic only a short while into the first game. Our group was always only just keeping up with the game’s increasing complications. This is clearly part of the excellent design as a series of difficulty stabilisers aid players when performing poorly and hinder teams that have everything going well. I have played many games of Pandemic before, but easily the best 3 games ever have been during our run of Pandemic Legacy. Dealing with the extra rules and knowing that success or failure will have lasting repercussions definitely increased the intensity. The pacing is near perfect. Only the very last game was anything less than a challenge. Perhaps due to our experience, and maybe partly due the struggle intentionally decreasing in order to provide a suitable denouement. Just the idea that a boardgame may be trying to create a “suitable denouement” should be enough to prove this is an incredible achievement.

The games themselves tend to be a little longer than normal Pandemic, on the order of 30 minutes or so. The extra time taken with extra setup and trying to handle all the new rules. It greatly helps if players understand Pandemic before trying the legacy version. Also there is no replayability. Many people online have criticised the game for only being able to play it 12-24 times and then it is finished. The game even requests that certain cards be destroyed. However, I see no problem with this. The only board game I have played more than Pandemic Legacy, is Pandemic itself! I am definitely content with the finite nature of the game. The experience took nearly a year’s worth of game session to complete - there is value for money here.

This was an extraordinary board game experience. I’m very happy to have had the chance to play until the end. Pandemic Legacy is strongly recommended, with one caveat. The quality of the games will depend on the qualities of your gaming group. Can you get 2-4 people together regularly to play? Do they enjoy playing such co-op games over extended periods? While playing Pandemic Legacy we payed very few other games, there just wasn’t time. It may dominate any gaming group until finished, so is definitely a commitment. Long gaps mean rules get forgotten - we were definitely rusty on the occasions there was over a month’s break. This is the main reason I will be hesitant to play another Legacy-like game. Still, I count myself immensely lucky to have played this one through.