Starting as a teenager and continuing into my 20’s I had occasionally recurring dream of going up the Swan River from Perth (where I grew up). Within a few twists and turns it would quickly transform from urban city into wild bush with high river banks. Then I would arrive at a wonderful water funpark in the middle of this wilderness. I never thought much of it.

Recently I moved back to Perth. Now I live in Maylands, just a few kilometres from the city centre. Part of this area is a pennisula into a curve of the Swan River. Soon after moving in I went for a walk down to the river and immediately had a sense of deja vu. The area around the river is a park giving way to a swamp before the water, and on the other side are high banks with trees and modern apartment blocks poking up over the top. It reminded me of more realistic version of that dream (if the apartment blocks were gone). 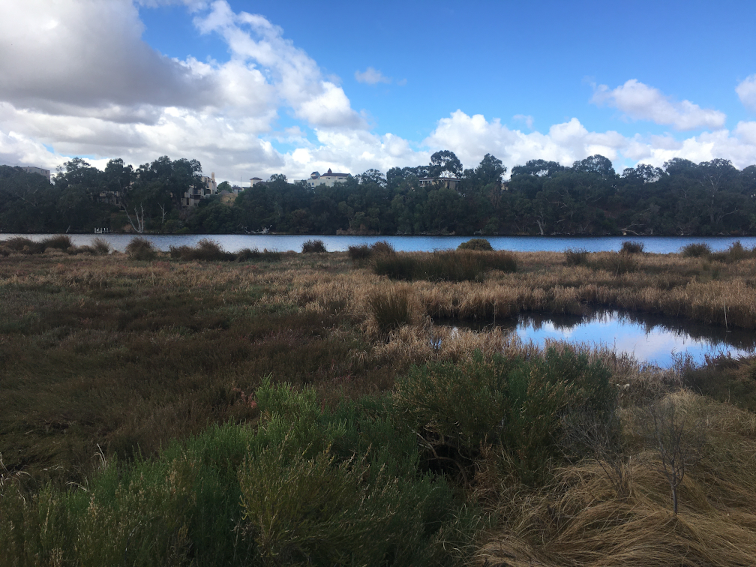 And then I saw the water park. It is clearly for small children - just some shallow pools and small slides. No photos as it is currently under reconstruction and mostly just looks like a building site. Presumably that dream must have been based on a real (and probably happy?) visit to this place when I was a very young. Forgotten consciously, it lived on in slumbering fantasy.

Some recent news on AI advances had me thinking about the implications and reminiscing on my own work in that area. Google’s new large language model named Pathways is the current trigger. Its results are impressive. I find its ability to reason about language almost incredible.

My views are definitely hot-takes as I am no longer an AI professional. Even when I was, I worked a long way from the pointy end that gets written up in research papers. Reader beware, the following could be bollocks. Still I’m not quite as shrill as this hot-take but probably not as thoughtful as these tweets either.

For reference, I did my undergrad thesis on neural nets in the mid-90s (just as they were going out of fashion again) and then worked on logic programming for postgrad research (as symbolic techniques were popular at the time). Most of my professional career has not been AI related - until 2018 when I worked for a company using older machine learning techniques to analyse financial market research (I left in 2020). However, I have kept an interested eye on the field the whole time.

Enough! At least as far as writing games blog posts (not for actually playing the games). I should some posts about other topics for a bit, rather than these easy but repetitive game short reviews. Anyway, are you interested in what have I been playing since the start of year? You are in luck, read on…

Regency Solitaire (15hrs): Many hours of the card game solitaire with unusual card layouts and little powerups. Not particularly hard, but can get a little grindy in the middle as you build a collection of powerups. There is a basic regency story told between rounds (like a simplistic Jane Austen plot). Nice game, delivers exactly what the title promises, kept me playing until the end.

System Crash (8hrs): Cyberpunk themed card battler with some deckbuilder mechanisms. The theme seems strangely applied, you are supposed to be a hacker, but almost all the cards are people who fight physically. Deckbuilding UI is a bit awkward. The battles are conventional (at least at first) with a decent implementation, but not enough to keep me interested. Everything about this game is “ok”.

Circle Empires (5hrs): Fast casual mini-RTS where the playing area is a grid of small circles each usually containing a bunch of enemies all drawn in a cartoony style. This game (at least on single player) devolves into a process of build a big army as fast of possible and then steamrolling your opposition. Very simple and not very deep, but then it is supposed to be casual. I’m surprised I only played 5 hours, I thought it would be more as I got gamified trying to get extra awards and game settings. I like that it plays fast, this game delivers exactly as promised - I enjoyed it.

Inscryption (16hrs): WTF. Well that is the standard review for this game out of the way. This is a game of surprises and secrets, thus best unspoiled. The basic gameplay is a deckbuilding card battler. It seems to be broken and unbalanced on purpose, so it is not the best by itself, but never outstays its welcome before things change enough to renew interest. The main point of the game is discovering what is going on, and that mystery is a decent story, although I personally found Act 3 to drag a little - not uncommon for me in story games. A good game about the experience, not so much the mechanics.

Lost Ark (5 hrs): An action RPG MMO from Amazon. Your laconic avatar bashes their way through hordes of monsters with an impressive array of powerful and pretty attacking moves. Gives the player a sense of being overpowered, while not seeming too easy (at least to me) - nicely done. The story feels strange with so many other players running around doing the same thing - mini-bosses would spawn and die repeatedly in front of me (bigger bosses are instanced). There are sooo many cutscenes! Art style is glossy JRPG and well done. Free-to-play with loot-boxes. Polished, well-made and impressive game, but I can’t imagine an MMO will hook me - and I definitely won’t be paying real money for it.

Eve Online (too many hrs): Just wanted to go back and see if Eve was the same as before (see here). Yep, still the same. Grindy or focused on multiplayer - neither are for me.

Endless Space 2 (20 hrs): Space 4X are a weakness of mine, and after a single 16 hour game, this is certainly a compelling one. It attempts to create stories with little chains of events, and has some interesting factions. Although it suffers from the standard problems of the genre (in my opinion) - it is too complex with many fiddly game mechanics, so that by the late mid-game it becomes a chore to manage your systems. The “game feel” is very similar to Stellaris, so you probably don’t need both, but now I own it, I will give it another go.

112 Operator (4 hrs): A management sim game where the players acts as the dispatcher for the emergency services (police, ambulance and fire brigade). You even occasionally need to answer emergency calls yourself (using multiple choice responses). There is a campaign, but I didn’t see much of a story, just escalating difficulty. The big draw is being able to play on a map of any city in the world, although when I tried to play on my home town it just crashed :( Ultimately this game didn’t grab me, the scenarios got bigger and increasingly hectic, but not more interesting.

Popup Dungeon (7 hrs): Dungeon delving rogue-like designed to look like paper miniatures and cut-outs as if it was being played on a tabletop. This theme carries through everything including the slow diegetic menus. Although the fantasy theme strangely applied as it includes superheroes and sci-fi characters. At one point I found myself in a modern fast-food restaurant. Continuously tries to be funny, but completely failed for me (and that distracted hugely from enjoying the game). Slow and RNG heavy with big difficulty spikes this just couldn’t maintain my attention.

Time for my yearly lowering of expectations. 2021 felt like a standstill year, but hopefully with some preparations for more productive future years. Firstly an appraisal of last year’s goals:

So what about this year? Time for some ambitious goals, not sure I can get all this done, but worth an attempt:

Is this becoming a gaming blog? I have a list of various blog topics and notes in a folder, but never seem to get around to writing them up. Anyone desperate to hear my tales of Malaysia and Spain? Anyway as the end of the year approached I tried out a few more games - I even finished two of them!

Fort Triumph (7hrs): The hook of this cartoonish top-down turn-based team combat game is destructible environments (so a valid tactic is pushing you opponents into areas where they will be crushed by falling or flying objects). There is also some team management and base building. The style and story is standard fantasy with some attempt at a comedy that landed flat for me. It is a decent game and kept me interested for a little while, but it is fairly generic in the end.

Pillars of Eternity (60hrs): I backed this classic top-down RPG on Kickstarter in a burst of nostalgia for similar D&D-based games from the late 90’s. It certainly succeeds in meeting expectations - it is a very good and slightly updated recreation of the old Black Isle style games. However, I at least have moved on since then. Taking 60 hrs to complete a “ok” story in an “ok” world with decent combat-based gameplay (but occasionally annoyingly stupid team members) is excessive. Much of the game is spent travelling between sites or reading text and making unimportant conversation choices (the blurb says they make a difference to the story, but I couldn’t see much effect). I completed the main story out of bloody mindedness. At half the size (or half my age) I would have thought this great. Instead I doubt I’ll play a similar game again - you can’t go back!

Driftland: The Magic Revival (4hrs): There are a lot of ideas (many of them good ideas) in this cross between a fantasy RTS and a battle-heavy 4X. I didn’t have the required patience to learn the details (not an uncommon condition in 4X games), especially given the weak tutorial and lack of tooltips. Having the game played on floating fragments of a destroyed world and joining them together with little bridges is a nice touch. A decent game that needs a better tutorial.

Dominion (6hrs): a computer implementation of the original boardgame deckbuilder. It is basically exactly the same as the tabletop version - including paying for numerous expansions. It is fun, but slightly dated and limited compared to the best modern computer deckbuilders (eg. Slay The Spire). Probably only for those who are already fans of the game - like me, so this is staying on the desktop.

Sheltered (2hrs): A postapocalyptic base-building survival game with lots of crafting. Nothing in the previous sentence excites me, and this game did not exceed expectations. It is fiddly, with clunky controls, and a need to know recipes to get going. It seems to require study online before starting as the tutorial is threadbare (I kept losing and had no idea what I was doing wrong). Not for me.

They Bleed Pixels (1hr): A super-hard 2D platformer with pixel graphics. Looks good, but way too difficult for me - I couldn’t even get through the prologue. No game for old men.

Iris and the Giant (7hrs): Cute little deckbuilder, where you play as a young girl fighting her inner demons. It has the interesting mechanic that cards can only be played once and are then gone - if your deck empties it is game over. Also a clever way to defeat the final boss (which took me way too long to discover). There is a lot of replayability with secret paths and powerups, but once I got the end I felt I had done enough. A worthwhile game.